New Chancellor installed at the University of Derby

Lord William Burlington has been installed as the new Chancellor of the University of Derby, an ‘ambassadorial’ role held by his father, the 12th Duke of Devonshire, for the last 10 years.

Lord Burlington was installed as the fourth Chancellor at an official ceremony in the Devonshire Dome, at the University’s Buxton Campus last night (March 15, 2018).

He said: “It is an honour and privilege to become Chancellor of such an ambitious and forward-looking university and I intend to take on the position with an open mind, not with preconceived ideas. I am curious, I want to listen, and I want to learn.

“What I do know is that good education is the right of everybody, at all stages of life. It has the ability to transform lives and is fundamental to a functioning society. These sentiments are very close to my heart and will no doubt shape the way I approach the role.”

Lord Burlington’s career began in photography studying under Jorge Lewinski. He worked for eight years as a portrait photographer before setting up Jasmine Photographic Studios Ltd. However, much of his time is dedicated to the family’s businesses, at Chatsworth in Derbyshire, Bolton Abbey in North Yorkshire, and Lismore Castle in Co. Waterford, Ireland.

Also, he is Chairman of the Devonshire Educational Trust, which is an independent charity that works in partnership with the Chatsworth House Trust, offering diverse and accessible educational opportunities; from learning about matters of historical, artistic and architectural interest, to learning about the countryside and rural landscape.

Last night the Duke of Devonshire, who stepped down from his role of Chancellor at the ceremony, was awarded an Honorary Master of Art to mark his contribution in the world of art as a collector and conservationist of important national and international works. He was presented with the award by Sir Michael Craig-Martin, who studied Fine Art at the Yale University School of Art and who was considered a key figure in the emergence of young British artists in the early 1990s. 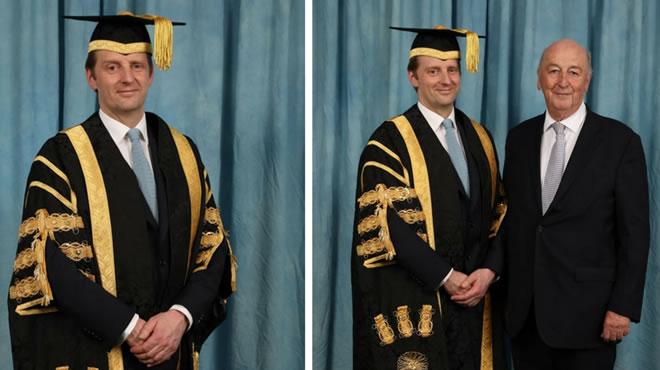 During the ceremony the Duke was presented with two bespoke pieces of artwork created for him by artists Lynda Adlington – a first-year University of Derby Fine Art student – and Rosie Young – a third-year student of the University’s Illustration degree, both of whom felt privileged to be have been selected for this commission.

The Duke said: “It has been an honour to be Chancellor of the University of Derby for 10 years. As I step down from the post at this wonderful university, I reflect on what has been a tremendous decade; the city of Derby has achieved its mission to grow as an inspirational city and to be a beacon in the UK, and the University has gone from strength to strength and I am confident it will continue to do so.”

The Chancellor is the non-executive titular head of the University who normally presides at meetings of the University Court, ceremonial occasions and at award ceremonies which take place in Buxton, Derby and overseas.

The University of Derby’s first chancellor was Sir Christopher Ball from 1995-2003, followed by Professor Leslie Wagner from 2003-2008, before the Duke of Devonshire was installed.

Professor Kathryn Mitchell, Vice-Chancellor at the University of Derby, said: “We have been immensely privileged and proud that the Duke of Devonshire has served as Chancellor for 10 years. During his tenure, the Duke has enabled the University to develop stronger links between the University and Chatsworth but more importantly harnessed the ambition of our staff and students, and encouraged a more global perspective, putting Derby and Derbyshire on the international stage.

“The installation of a new Chancellor is a very significant event in the life of the University, one that allows us to reflect upon current successes and look forward to new challenges and opportunities. We are delighted to welcome Lord Burlington to the University of Derby and look forward to working with him to help realise our collective ambitions of providing educational opportunities capable of transforming lives.”