The Duke of Devonshire has been awarded an Honorary Master of Art from the University of Derby, marking his contribution to the world of art as a collector and conservationist of important national and international works.

He was presented with the accolade by Sir Michael Craig-Martin, a key figure in the emergence of young British artists in the early 1990s, at an official University ceremony which saw the Duke step down from his role of Chancellor, and his son, Lord William Burlington, installed in the role.

On receiving the award, the Duke said: “During my 10 years as Chancellor of the University of Derby, I have been in the fortunate position to meet a number of budding young artists with tremendous skill and enthusiasm and it has been a joy to watch them develop their talent.

“I am passionate about art, so to receive an Honorary Master of Art in recognition of this is a wonderful sentiment and end to my Chancellorship.” 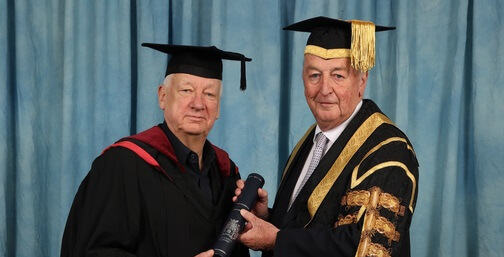 The Duke of Devonshire, who resides at Chatsworth House in Derbyshire, is an avid collector of contemporary art and sculpture and has ensured that the Devonshire collection is a living one that is expanded continually through his support of new and innovative artists, sculptors and craftspeople.

He spotted artist and Derby alumnus Paul Cummins’ work at the University of Derby’s degree show and offered him the opportunity to exhibit his ceramics at Chatsworth. From that exhibition, Paul’s profile grew, culminating in his extraordinary and stunning installation, Blood Swept Lands and Seas of Red, at the Tower of London. This subsequently toured the land and was also displayed at the Silk Mill in Derby.

The Duke is Deputy Chairman of Sotheby’s, the Patron of the Derby Museums Trust and President of the Arkwright Society. In April 2016 he was made an Honorary Fellow of the Royal Academy.

During the ceremony the Duke was presented with two bespoke pieces of artwork created for him by artists Lynda Adlington – a first-year University of Derby Fine Art student – and Rosie Young – a third-year student of the University’s Illustration degree, both of whom felt privileged to be have been selected for this commission.

Professor Kathryn Mitchell, Vice-Chancellor at the University of Derby, said: “We have been immensely privileged and proud that the Duke of Devonshire has served as Chancellor for 10 years. During his tenure, the Duke has enabled the University to develop stronger links between the University and Chatsworth but more importantly harnessed the ambition of our staff and students, and encouraged a more global perspective, putting Derby and Derbyshire on the international stage.

“Presenting the Duke with an Honorary Master of Art is a way of recognising and celebrating his lifelong interest in the creative arts and his commitment to promote new and established artists.”