A University of Derby student has won the East Midlands Fashion Awards 2018 for her womenswear collection. 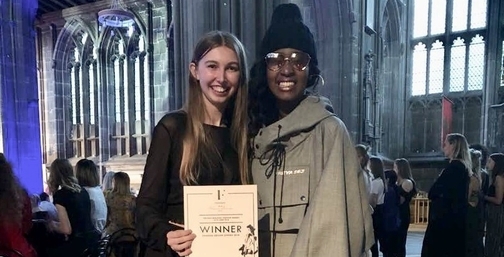 Freya Whittaker, a third-year Fashion student, entered her womenswear collection titled WORK#ER based on a psychological concept called 'deindividuation', which focuses on loss of identity in the work place through wearing a uniform.

Freya said: “My collection expresses the notion of deindividuation in contemporary culture by exploring the relationship between white collar and blue collar work, and also the concept of ownership between the two. I have explored this relationship by juxtaposing blue and white collar fabrics, using bold provocative statements, conceptualised printed images and fabric manipulation.

“I wanted to create a collection that was wearable and relatable to everyday life, so I deconstructed traditional workwear garments such as a suit, secretary skirt and an office shirt and created hybrid garments such as the mafia shirt dress.”

Freya presented her collection using models on a catwalk along with other shortlisted students from other universities. Three students from the University of Derby – Yu Chiou Chen, Emily Clarkson and Abhirami Vijayakumar – also featured their work.

The awards are run by Fashanne and are currently the only fashion awards for students in the East Midlands. There are four main awards: Knitwear Design, Textile Design, Footwear & Accessory Design and Fashion Design, which Freya won.

Freya added: “Winning the award was a huge surprise. It is so refreshing to know people, particularly the judges, are into my work, understand what I am trying to express and also appreciate the time and hard work that has gone into it. It was great to be a part of such an amazing evening with lots of great work on show.”

The judging panel included fashion expert and TV presenter Patrick Grant; Sourcing Director at ASOS Simon Platts; and designer and consultant Daniel Hanson, who is to receive an honorary award from the University of Derby this summer.

Fiona Hawthorne, Senior Lecturer in Fashion at the University of Derby, said: “'Freya developed WORK#ER, which was aesthetically strong in the experimentation of oversize cutting and included the application of text to fully endorse the concept.

“We are so proud of Freya as she has worked tirelessly throughout her final year to release a fashion collection that has already got her on the East Midlands fashion map.”