The University of Derby has increased the number of student nurses placed by more than 100 this year compared with the same point in 2016, despite reports released today that universities in England have seen a six per cent drop.

The September cohort of nursing students at Derby has been filled, with interviews already taking place for the March 2018 intake. It’s in stark contrast to the nationwide trend shown in today’s Daily Clearing Analysis: Overview from UCAS.

In the 15 days that have passed since A level results day, 19,670 applicants to nursing from England have been placed compared with 20,880 last year. 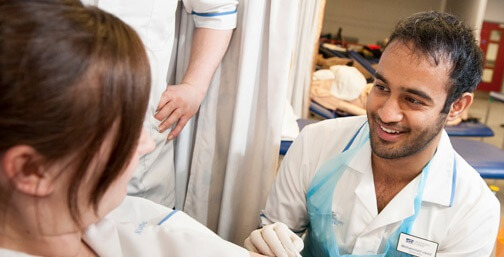 Dr Bill Whitehead, Head of the Department of Healthcare Practice at the University, said: “I’m really proud that our adult and mental health nursing courses are so popular.

“Our local health service partners have been working with us for years to increase student numbers and provide the nurses that we need in the region. This year we had the opportunity to significantly increase the places offered based on an increased number of placements being made available.

“Our staff have worked really hard to support students applying for these courses, as well as our degrees in Health and Social Care and Child and Family Health and Wellbeing which still have places available.”