The University of Derby Science Park, launched today, will be at the spearhead of the industrial digital revolution.

In a stellar location, adjacent to the world headquarters of Rolls-Royce, the park will be home to the most innovative start-ups and growing businesses in the UK and will bring them together with global companies and leading-edge academic researchers, policy-makers and funders.

Borne out of a partnership between the University of Derby, Derby City Council, major businesses and entrepreneurs, it will write a new chapter in the history of a city with an industrial heritage which stretches back 300 years.

University of Derby Vice-Chancellor, Professor Kathryn Mitchell said: "We are delighted to be able to support teams of academics and students who will provide an extra dimension to engender innovation and develop world class products. This opportunity to work within an outstanding facility with a group of innovators is very much welcomed, especially due to the proximity to the manufacturing bases of prestigious companies such as Rolls-Royce, Toyota, Bombardier and JCB. 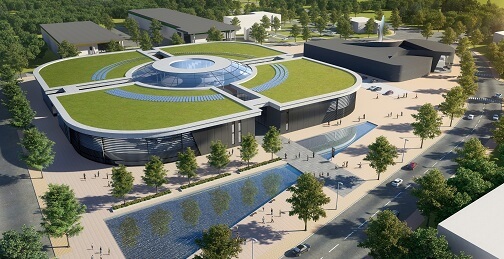 "We believe that this centre of excellence is a good example of the type of collaboration which will enable the Midlands Engine to both stand out and attract potential investors.

"It clearly demonstrates that Derby remains at the forefront of thinking and making."

Derby is at the cutting edge of advanced manufacturing and has unique importance in the spheres of maritime, rail, automobile and aerospace. The Science Park will be the hub of exciting 21st century developments in these and associated industries.

It will be a key player in the Midlands Engine For Growth.

Derby City Council deputy leader, Martin Rawson said: "None of the science parks which have already been built in the U.K. will be able to equal ours for the quality of collaboration and historical pedigree.

"From The Enlightenment onwards, Derby has been a centre for forward-thinking which has led the world and it still does, particularly in the arenas of aerospace, automobile, maritime and rail.

"The jobs created on the Science Park will be of the very highest quality and will prove that Derby is leading the industrial digital revolution."

"No other city in the world can match our past achievements in industry and we believe that none will match our future advancements and discoveries."

The University's Deputy Chief Executive Hari Punchihewa added: "The creation of the University of Derby Science Park has been a shared vision between ourselves, Derby City Council and our business partners.

"We are looking forward to working with businesses across a range of industry sectors and seeing them develop, grow and flourish within the Science Park environment which is world class in supporting innovation, research, skills development and digitisation."

The University of Derby Science Park is less than ten miles from East Midlands Airport, which is the second only in the UK to Heathrow in terms of cargo delivery, and is next to the A50 which connects the nearby M1 and the M6.

Situated on Infinity Park, just to the south of Derby, it has enterprise zone status which offers big financial incentives to start-ups.

The Science Park can match every business need with offices, studios and workshops between 200 and 10,000 square feet.

Our flexible work space can suit start-ups, early-stage businesses and established high-growth SMEs hoping to establish themselves or expand.