The Great British Bake Off’s youngest-ever contestant visited the University of Derby’s Buxton Campus to give future bakers a taste of what it is like to be successful.

Martha Collison competed on the popular TV show while she was still at school and, since completing her A-levels, has published two recipe books and writes regularly for the Waitrose Weekend magazine.

Martha's vibrant Christian faith has helped her to cope with the ups and downs of being in the media spotlight and is the inspiration for her involvement in charitable campaigns including Tearfund's 'No Child Taken'.

The event at Buxton was the fifth annual University of Derby Chaplaincy and Churches Together in Buxton public event.

Event organiser Ingrid Keith, the University’s Ecumenical Chaplain, said, “I’m thrilled we were able to offer such an exciting opportunity to students at the University of Derby and Buxton and Leek College, many of whom are studying with us in order to become expert bakers themselves.

“As a Chaplain, I hope that Martha’s audience will be as much inspired by her vibrant Christian faith as by her success in the world of baking.” 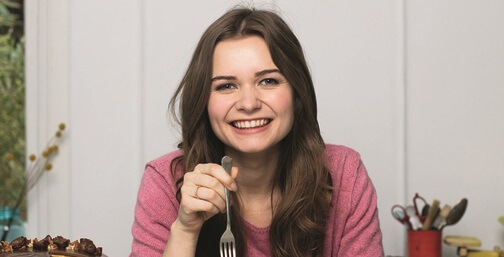 During the event, Martha demonstrated how to make a batch of caramel madeleines with rum and butter sauce, as well as taking part in an interview with Kathryn Scott, Senior Lecturer in Hospitality at the University of Derby, and 15-year-old Charlotte Armett, representing Churches Together in Buxton.

A cake competition was also held, along with cake sampling and a book signing. Hannah Maddocks, from St Thomas More School, won first prize in the under 17s class. In the 17-21 class, Claire Dickson was named the winner and Abdul Siddiqui’s Autumn-themed cake, was the winner in the over 21s class.

Martha said: “It was a real pleasure to visit and speak at the University of Derby on behalf of the chaplaincy. I loved meeting the students, judging their fantastic autumnal cake creations and sharing about my baking experiences and my faith.”

Martha appeared on The Great British Bake Off in 2014 and, aged 17, making it to the quarter-finals. Her latest book is called CRAVE, published by HarperCollins.