Actor Brian Blessed will receive an Honorary Doctorate from the University of Derby at its annual Awards Ceremony in Buxton.

The award recognises Brian’s work to promote conservation in the region, including the Monsal Trail in the Derbyshire Peak District. He will receive his award alongside the University’s graduating students at the Awards Ceremony in the Devonshire Dome on 11 November 2017.

The son of a South Yorkshire coal miner, Brian was born in 1936 in Mexborough and grew up in the mining village of Goldthorpe. He trained at the Bristol Old Vic Theatre School before embarking on a career that would see him become one of this country’s best known and most highly respected actors. 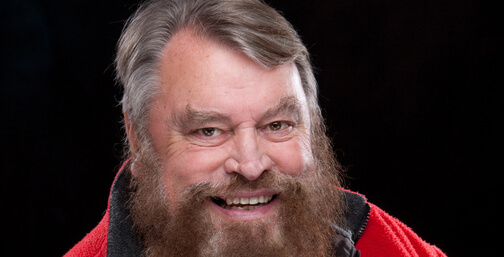 Brian has enjoyed a distinguished and varied career – most notably in film, television and theatre – in which he has worked with Andrew Lloyd Webber and the Royal Shakespeare Company. He is well-known for playing ‘Vultan’ in the film Flash Gordon and has appeared as a host on the BBC satirical panel show, Have I Got News For You.

His love of mountaineering has seen him undertake three expeditions to Mount Everest, where he reached a height of 28,000 feet – the highest a man of his age had achieved without oxygen. Brian has also completed a trek to the North Pole, an expedition to through Venezuela, a climb to the summit of Mount Ararat in Turkey and a climb to the summit of Mount Kinabalu in Malaysia.

Professor Kathryn Mitchell, Vice-Chancellor of the University of Derby, said: “Brian is one of our country’s most respected actors and has made a great contribution to our region through his efforts to promote conservation. I am therefore delighted to confer him with an Honorary Doctorate alongside our graduating students.”