The Apprentice doyen Claude Littner visited the University of Derby this week (November 22) to discuss his varied and successful career, battling cancer and what it takes to make it to the top in business.

Lisa Biesty, Managing Director of Club DCFC, hosted the evening which was attended by more than 250 students and members of the public.

During the event, Claude talked about his new book Single-Minded: My Life in Business, in which he recounts his “terrible” days as a student and his extraordinary journey setting up his own business buying and floating Powerleague, the five-a-side football pitch operator. 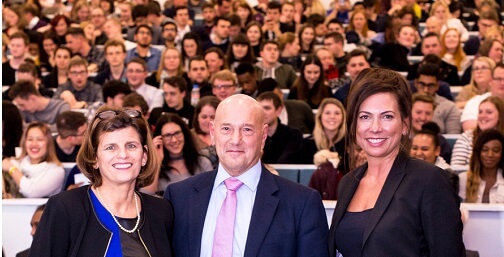 For many years since the early 1990s, Claude has worked alongside Lord Sugar, although Claude’s first interview with him didn’t go to plan. Telling the audience at the University of Derby, he said: “Lord Sugar had my CV in front of him and he didn’t say a word. So after a minute or two of silence I said shall I tell you a bit about myself? He said ‘go on then’ so I started telling him about how great I was. He appeared totally disinterested and after a while he got up and said 'bored!' and walked out.”

Lord Sugar actually said 'I'll talk to the board' and hired Claude as Chairman and CEO of Amstrad International that day.

When asked about his role in The Apprentice, Claude said: “I don’t play up for the camera, business is business and when it comes to it I’m deadly serious and I don’t mess about.

“I was delighted to take on the role of the interviewer in The Apprentice and as time has gone by that role has developed.

“The fact is somebody is going to get £250,000 which will be life changing so it’s very important when I conduct the interviews that I make sure to the best of my ability that I try to get the best candidate in front of Lord Sugar.”

At the talk, Claude was asked about his experience of being diagnosed with Non-Hodgkin Lymphoma and given six months to live. “When I found out I had cancer it was a very, very tough time. It was very uncertain that I would pull through but here I am to tell the tale."

Claude urged the audience to “be persistent, work hard and find the opportunity yourself. Inevitably you make mistakes in business, but you keep trying.”

Lisa Biesty, who hosted the event, said: “It was a huge honour to interview Claude Littner, a great personality and ultimate business professional.”

Professor Kathryn Mitchell, Vice-Chancellor of the University, brought the event to a close. She said: “I would personally like to thank Claude for coming to the University. It’s great to see so many students here who have been fortunate to listen to Claude and hopefully be as inspired as I am.

“I was fortunate enough to meet Claude in my previous role at the University of West London, he taught me about the importance of business wherever you’re working.”

Following the talk, a book signing took place where Claude continued to offer insight and answer questions from the audience. Single-Minded: My Life in Business is available to buy through Amazon and good book stores.