The University of Derby’s new £6.9 million site on Sheffield Road is another mark of the town’s continuing success in economic regeneration, the Duke of Devonshire said at its official opening on Thursday.

The conversion of the former St Helena Girls Grammar School will offer 21stCentury courses in healthcare, engineering, information technology and business to support the town’s growth.

The University has long had a presence in Chesterfield, but decided that a dedicated site was needed when demand for its highly-acclaimed nursing and public health courses exceeded space in its former base in offices in the Chesterfield Chamber complex.

The sympathetic conversion of the Grade II Listed building on Sheffield Road has retained most of its original features alongside a hi-tech, high spec learning environment for tomorrow’s nurses, engineers and business leaders.

St Helena was ahead of its time even when it was opened in 1911, as architect George Widdows pioneered the use of light and air to create classrooms which put pupils’ needs at its heart. His work was copied all over the world.

Restoring the large number of windows alone cost £1 million, and the Duke reminded guests that one of his family’s famous homes was known as “Hardwick Hall – more glass than wall.”

“I’m not sure that this doesn’t put Hardwick in the shade,” he said. “George Widdows understood the importance of the environment to students, which in 1911 was way ahead of its time.”

The Duke praised Chesterfield Borough Council for embracing the project from the start, adding: “The building is something I think Chesterfield, the University and all of Derbyshire should really be proud of. I regard it as another banner of Chesterfield’s success.”

University Vice-Chancellor Professor Kath Mitchell said that the University had invested heavily in keeping true to the traditions of the building, but such attention to detail had only been possible with the support of funding partners. 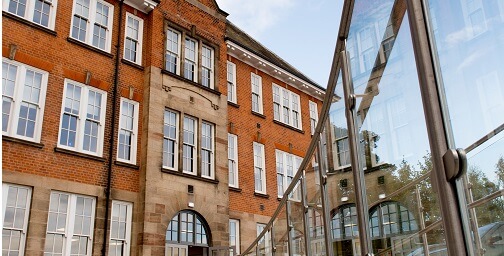 And its opening was the just the beginning of more partnerships in the region in business, engineering and technology as the new site boasts an Innovation Centre that will allow SMEs to incubate new business ideas, increase their speed of growth and de-risk the process of developing new products.

“We hope to make a big difference to Chesterfield in the future,” she said.

Other facilities at the site include a mock ward built close to NHS standards with “robot” patients who simulate illness and reactions to drugs, and an immersive suite with giant screens which create the backdrop to situations students will face at work, from the inside of an ambulance to a patient’s home.

Other courses at the site – many of which can be studied part-time – include HND Business and Management, BEng (Hons) Professional Engineering and FdSc Information Technology.

The site has received investment from partners including £3.48million from the D2N2 Local Enterprise Partnership, promoting economic growth across Derby, Derbyshire, Nottingham and Nottinghamshire.

Funding and support from the European Regional Development Fund is contributing to the costs of equipment and support of the Innovation Centre at the Chesterfield site, which will support innovation and business growth as part of the European Structural and Investment Funds Growth Programme in the D2N2 area.

The original panelling, bannisters and even some of the fireplaces have been saved, and the beautiful parquet floors restored.

The original sash windows were restored but with double-glazing to meet energy efficiency targets at a cost of £1 million pounds.

As the only Higher Education (HE) institution in Derbyshire, the University plans to encourage businesses and the workforce to grow in Chesterfield and North East Derbyshire by providing new, local progression pathways to higher level skills provisions.

Research commissioned by the University into the economic impact of its Buxton Campus ­-  which this year celebrates a decade since its official opening - showed that it supported 500 jobs annually through a total spend of £32 million, a result which it is hoped will be replicated in Chesterfield.