A graduate who created an animation to document an historic pudding fight has won a top award for his work.

Thomas Edmondson, who graduated from the University of Derby last week after completing a BA (Hons) in Animation, based his feature around the 19th Century Paignton Pudding Riot – a celebration to mark the arrival of the railway where a crowd of 18,000 scrambled for pieces of the pudding and a riot broke out.

And his work, which he created for his final-year project, won the Screening Prize at the New Designers Awards – a new award for 2016 to recognise the importance of digital media.

Thomas said: “In 1859, Paignton successfully completed an extension of their railway line. To mark the occasion, a day of celebration was planned and a whopping one and a half ton pudding was baked for the navvies that worked on the railway and also for the poor in the community.

“The day was fuelled with copious amounts of local Devonshire cider, and with inhibitions lowered, it wasn't long before the delicious centrepiece proved too much temptation for the local bystanders. A mass brawl ensued and the cake was decimated.

“The Paignton Pudding Riot is a true story from British history. When I heard it about it, it instantly appealed to me. Not only is it a bizarre tale, but its themes of excess and mob mentality still ring true today.”

Each year, an exhibition, called New Designers, takes place in London where more than 3,000 graduates showcase a selection of work including furniture, product and industrial design, spatial design, and visual communications.

At the exhibition, held at the Business Design Centre in London, people are able to buy new products for their stores or homes, get inspired by fresh ideas and discover new design talent to commission or recruit and a series of awards are handed out to promising talent.

Thomas said: “I visited New Designers to check out the exhibitions and take in the work of graduates from other universities. There were some really impressive projects on show.

“When it was announced that I had won the Screening Prize I was in disbelief. It was a complete surprise but obviously it felt really good to get such a positive response for my work.” 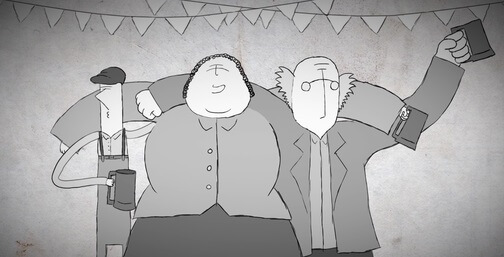 Thomas created the animation using a combination of techniques; frame-by-frame, stop motion as well as video.

The animation uses a grey-scale colour palette for the characters and environment to emphasise the historic event.

The catalysts of the riot, the pudding and the cider, are in colour and are actual food and drink footage, such is their significance to the story.

The judging panel said Thomas's work had a “distinctive and original style” and was a “well-rounded and complete film with great originality and humour.”

Thomas said he had been encouraged to submit his work to the New Designers Award by staff at the University of Derby.

He added: “The course at Derby was great. The animation teachers offer amazing support and nurture the abilities of each student. I'm incredibly happy to have graduated from the University of Derby.”

Richard Levesley, Programme Leader for BA (Hons) Animation at Derby, said: “We are very pleased that Thomas has been awarded the Screening Prize at New Designers exhibition.

“He has embraced all the opportunities offered to him on the programme over the past three years and has shown a high level of professionalism and dedication to his subject. His work demonstrates strong uses storytelling, image making and advanced uses of animation production to excellent effect.

“I have no doubt that Thomas will excel in the field of animation. I am very pleased that the judges from industry have recognised the strength and originality of his animations and I look forward to seeing what he does next.”