Students from the University of Derby will present their gaming creations to leading UK gaming companies on Friday, April 22 at Games@Derby.

BA (Hons) Computer Games Modelling and Animation student Kyle Horwood, who exhibited his work last year, said: "The game expo was a really fun experience. It was great to spend 12 weeks creating a game, and then be able to present it and allow people to engage and interact with the game.

“The module itself was a fantastic learning experience in regards to team building and creating a larger game.”

Prior to the showcase, there will be a Dragons Den style panel, consisting of industry professionals and gaming experts from universities across the UK. 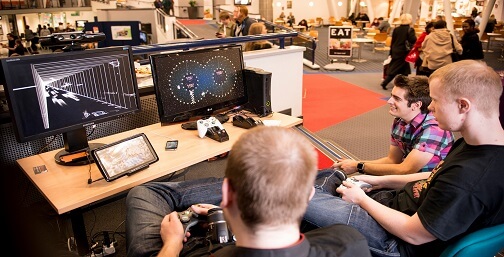 Ryan Simpson, a Games Programmer from SEGA, one of the leading interactive entertainment companies that cultivates creative talent worldwide, will be on the panel, along with representatives from Playground Games, Rare and Sumo Digital.

Each team will present their game to the panelists, which will be followed by testing the games.

Local schools and colleges will also be attending, enabling students to trial the games for the first time and learn about the world of gaming.

Robert Berry, Lecturer in Computer Games at the University of Derby, said: “The games designed for the expo form part of the student’s final year project. This has resulted in a diverse range of ideas being conjured up through the collective imagination of students during a collaboration between programmes.

“Students have chosen a sample of sounds from a collection provided which have been the driving force behind the visual aesthetic and gameplay. This year’s theme is entitled ‘soundscape’.”

In addition, first and second year computing students at Derby will also have the chance to display their work at the University’s annual games showcase ‘Games@Derby’. There will be a series of themed activities throughout the day including a retro-gaming showcase, displaying video games made exclusively in Derby.

To book your place, go to: www.derby.ac.uk/gamesshowcase