A series of Victorian-style portraits which come to life when you walk past have been created by University of Derby academics.

The images, which form an exhibition called Quickening at Derby Pickford’s House, have been produced to destabilise the boundaries between the animate and inanimate, the past and the ‘passed away’.

Each of the seven life-sized portraits is a moving image in which the pictured subject ‘quickens’ or comes to life for two to three minutes to engage with the individual viewer.

The project, which was inspired by 19th century Victorian portraiture photographer Julia Margaret Cameron, was created by Dr Christine Templeton-Parker, cinematographer Stephen Watson and photography historian Dr Jane Fletcher as part of a research project into Sigmund Freud’s notion of The Uncanny or ‘das unheimliche’. 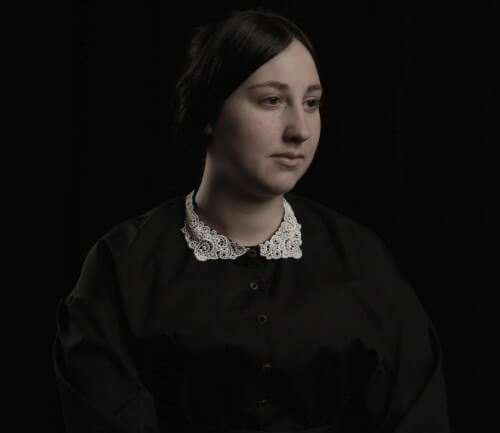 Christine, a multi-award winning filmmaker and writer who teaches screenwriting, writing for performance and directing at the University of Derby, said: “Quickening taps into all that is uncanny about film and photography.

“By breathing life into the frozen frame through the introduction of subtle colour and movement, our digital portraits ‘quicken’ to evoke the poignancy and terror of the longed for but, dreadful, return of the arrested moment, the lost soul.

“Quickening experiments with photographic portraiture and narrative, much as Cameron did with the new technologies of her time. She had a method of dressing people in her daily life in ‘classical garb’ and therefore juxtaposing photographic fact with staged fiction.”

“We were interested in exploring the role photographic portraits have in the grieving process, and in our sometimes repressed beliefs about immortality,” added Christine.

The images were created by using seven people, including children, to pose as Victorian-style models.

Stephen Watson, a freelance cinematographer who teaches Film Production at the University of Derby, said: “The production process involved filming each character’s performance in slow motion with the Red One digital cinema camera. In post-production, these were then retimed into a freeze frame which slowly turns into a moving image and then goes back to a still frame again.

“Pickford House Museum is a perfect site for the works because it allows people to make connections between traditional portraiture and contemporary art and to tap into Derby's rich heritage from a refreshed perspective.”

Jonathan Wallis, Head of Museums at Derby Museums, added: “The Quickening installation fits seamlessly into the 18th century Pickford’s House, placing figures into the room settings it brings the house to life for our visitors. Taking inspiration for the early photography of Julia Margaret Cameron, it is perfect prelude to the Format International Photography Festival exhibitions that will be exhibited at Pickford’s House and across the city next March.”

School, college and university students are able to attend the exhibition and explore the ideas used in the research. They then have access to a workshop where they can make their own moving image portraits using the Red One digital camera and have them displayed on screens.

Professor Chris White, Head of the Department of Media and Performing Arts at the University of Derby, said: “The creative industries, film and media and digital platforms are the UK’s fastest growing industrial sector, generating nearly £10m per hour for the economy. The government has a target to double inward investments and exports by 2020*.

“It’s vital that young people are familiar with the opportunities that exist through the creative industries and this research project offers an opportunity to see our research into creativity and technology, in practice.”

The event has been part funded by NEMCON, which is funded through the HEFCE National Networks for Collaborative Outreach initiative, and the University’s College of Arts Research Fund.

The exhibition is open to the public and is on show until December 19, 2016.