On Thursday 23 June 2016 the Most Reverend and the Right Honourable the Archbishop of Canterbury will be guest of honour at an event hosted and organised by the University of Derby’s International Policing and Justice Institute (the Institute).

The aim of the event — entitled ‘Action 2030: Ending Modern Slavery Together’ — is to encourage companies from across the East Midlands to pledge their support for the Athens Ethical Principles, which were adopted by the United Nations Global Compact in Athens in 2006.

2030 is United Nations deadline for the eradication of all forms of human trafficking; it is one of their sustainable development goals and reinforces human trafficking’s status as the second most prolific crime in the world.

‘Action 2030’ forms part of the Archbishop of Canterbury’s three-day visit to Derby, which has been organised by the Bishop of Derby’s office. The Bishop of Derby played a pivotal role in drafting the Modern Slavery Act 2015 and two years ago he was instrumental in establishing the Derby Modern Slavery Partnership; he remains at the forefront of the campaign to bring an end to human trafficking and all forms of labour exploitation.

Commenting on the event Bishop Alastair said: “We’re delighted to welcome the Archbishop to our Diocese and to share with him some of the vital work carried out in the community, and also the challenges and opportunities we face. I am delighted he will be joining me to urge business leaders to combat modern day slavery and exploitation in the supply chain. His presence will serve to shine a spotlight on the issue.” 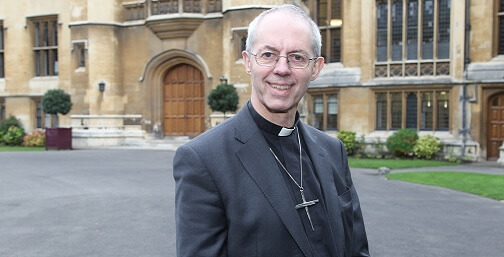 Companies that sign-up to the principles adopted by the UN will be making a commitment to eradicating human trafficking and ensuring that their entire supply chains are free from labour exploitation.

Professor Kathryn Mitchell, Vice-Chancellor of the University of Derby will formally open the event and officially welcome the Archbishop of Canterbury — who will deliver a short speech. This will be followed by David Arkless, former CEO of ManpowerGroup and former president of End Human Trafficking Now, who will deliver a short presentation on the reality of human trafficking. David Arkless is a world-renowned expert on labour market trends and member of the global Business Coalition Against Trafficking (gBCAT).

After the presentations senior personnel from a number of companies and organisations, who have already agreed to support the campaign, will sign-up to the Athens Ethical Principles in front of the delegates and in the presence of the Archbishop of Canterbury — who will counter-sign the pledge.

Professor Bampton, commenting on the event, said: “It will be an honour and a privilege to welcome the Archbishop of Canterbury to the Institute. We are all delighted that he supports the aims of our campaign that will help improve the lives of tens of thousands of people around the globe who are being trafficked.

“Many companies in the developed world unwittingly support human trafficking, especially when they employ staff based overseas — many of whom are trafficked or otherwise exploited. This is why it is so important for companies in our region and beyond to sign-up to bring an end to human trafficking by 2030.”

Find out more about the University's International Centre of Excellence in Policing and Criminal Justice.