Forty seven members of staff at the University of Derby – who have accumulated 1,000 years of service – have been honoured for their hard work.

Forty three members were awarded for 20 years’ service, two team members for 30 years and a further two for 40 years at the University.

The event was hosted by Professor Kath Mitchell, Vice-Chancellor of the University, who invited staff to join her for a celebratory lunch to thank them and mark their achievement.

All participants were presented with a certificate in front of friends, family and colleagues.

Steve Taylor, Technical Manager for the College of Life and Natural Sciences, who was awarded for 40 years’ service, said: “I’m very proud to have worked at the University of Derby and its formerly named institutions for this amount of time and I am very pleased that such service is recognised and celebrated.

“I was only 17 when I started working here. My first memory dates back to September 8, 1975 when Professor Peter Baker gave me my first task as a junior geology technician to begin cataloguing the palaeontology collection. This was my dream job! I went home and told my dad all about it and then carried on cataloguing my own fossil collection at home.

“The geekiness has worn off, I hope, but there have been many highlights over the past 40 years. In 2008, I was fortunate enough to go as support for the Pacific North West field trip, driving 2000 miles from San Francisco to Seattle in the scorching heat and taking photographs of some spectacular scenery.”

John Crossley, Programme Leader for BSc (Hons) Music Technology and Production, has been at the University for 20 years.

On receiving his long service award, he said: “My first reaction was amazement that it was in fact 20 years – it has passed by so quickly!

“I’ve really enjoyed working with a great team of colleagues and each year we get a new batch or eager students hungry to learn – this keeps me on my toes and my enthusiasm up.

“We’ve gone from squeezing very basic facilities into barely adequate spaces in the early days, to having our own bespoke arts building with first-class facilities where Music Technology and all our other media and arts activities exist together.

“One of my proudest achievements was the installation of state-of-the-art recording studios at Markeaton Street Campus three years ago which I project managed. I know we did the right thing because when students go in there for the first time they often ask ‘can I take some photos? I want to put them on my Facebook profile and make my friends jealous!’” 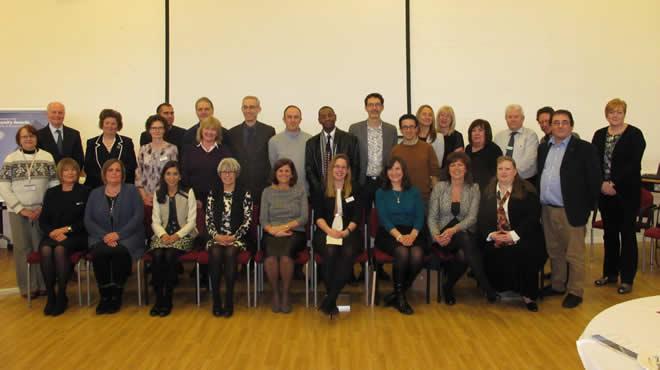 Speaking at the event, Professor Mitchell said: “It is really important that we acknowledge the commitment and dedication that everybody has given to the University.

“The purpose of these awards are to recognise lots of people who have shown dedication and are really important in the running of an institution as big as Derby. Everybody has given way beyond what is on their job descriptions and that is what creates a community.”