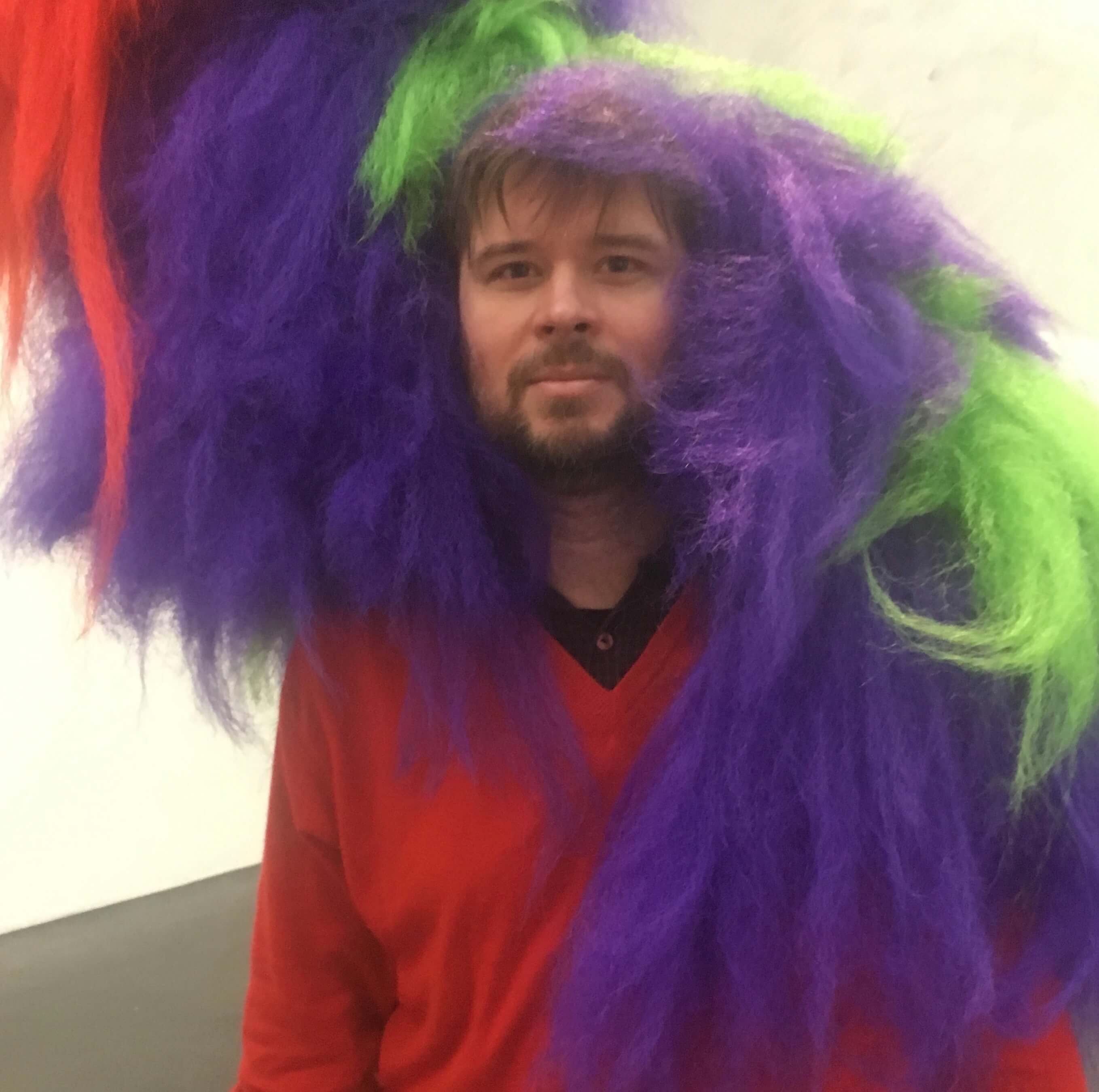 I am a writer, researcher and teacher. I work across fiction and non-fiction. I draw on critical theory and cultural studies, often in collaboration with artists and designers in the creation and publication of books, pamphlets and other things. At the University of Derby, I am an Associate Professor of Creative Writing and Programme Leader for MA Creative Writing.

For the MA Creative Writing, I am the Module Leader for:

I also teach on:

For the BA Creative and Professional Writing, I am the Module Leader for:

I also teach on:

For the BA Writing and Publishing, I am the Module Leader for:

I run Spirit Duplicator, a small press dedicated to publishing poetry, fiction and theory in attractive editions. It was founded in 2015 and named after an old copier that printed in a purple ink that (allegedly) caused intoxication when inhaled. The press owns a spirit duplicator (a Roneo Model 50) but most of the pamphlets and books are produced using digital or risograph.

I am research active in four areas. I supervise four PhD students and am accepting more. My research areas are:

Visual and material culture of writing

I am interested in the impact of design on both composition and the organisation of text. This emerged from my collaboration with the Swiss designers Go! Grafik in producing three editions of the creative writing journal Route 57. This led to founding the small press Spirit Duplicator. Our production processes often privilege design in the writing process. So far, we have published 20 books, which has led me to think about and experiment with technologies such as the Roneo Duplicators and Gestetner Mimeographs alongside printers such as Erwin Blok.

I work with and through creative and critical writing, performance and visual arts to answer interdisciplinary research questions or explore an area of research interest. I was the principal investigator for No Picnic. This resulted in an edited collection and included the work of three research assistants and five researchers.

Some of my work in this area is focused in the medical humanities. As a member of Phoenix, I developed comics for use by cancer survivors in navigating their sex lives post chemotherapy. This work led me into becoming a core network member of the AHRC Videogame Network focusing on the development of games and apps in aiding the play of children in hospital.

I also led another network for the Arts and Humanities Research Council (AHRC), Translating Performance, which focused on understanding asylum seeker and refugee performances in Sheffield.

The cultural development of neoliberalism

Much of my creative practice in fiction is focused on exploring neoliberalism in culture. In my creative non-fiction, I am particularly interested in understanding British culture, class and notions of Britishness, Englishness and America in UK popular culture across the long 20th century, but especially 1930s–1990s.

I am interested in the introduction of youth consumerism in Britain, growth in media, nightclubs, the internet and archives and notions of the past and the future. I have published on Star Trek's Spock, using the 'reboot' as a means of understanding neoliberal subjectivity.

My public engagement work, especially with the Showroom cinema and with music culture in Sheffield, has developed my thinking and publications in this area. In so doing, I have staged two major exhibitions and many performances, some of them on the first site of Western Works, Cabaret Voltaire's studio in Sheffield. Alongside the artist Paul Bareham, I have published a series of creative interventions into the haunted archive, The British Esperantist.

I am interested in radical education, youth, protest and the student experience both in fiction (campus/varsity novels) and in the higher education (HE) sector today. I have done much work via the Society for Research into Higher Education (SRHE) on a national level organising and commenting on the experience of higher education by students.

I am particularly interested in the monetisation of education, protest and the role higher education institutions have in the widest definition of student experience. This experience encompasses the night-time economy, the business of pleasure and student culture.

Where and how can resistance and critical thinking be fostered and political engagement encouraged? How can student experience be represented in texts? How can teaching and learning be made more relevant to student experience? I am especially interested in lad culture and masculinity, youth and banter, chants and blason populaire (the use of stereotypes) and has published in all these areas. Some recent work aims to critique the impact agenda and public engagement.

‘Public engagement, research impact and some awkward places I have found myself in' at East Midlands Doctoral Network Conference, Sep 2019, University of Derby.

‘Not the path’, part of the panel ‘When walking and writing merge—exploring the potentials and limits of ethnographic writing’ at Ethnography with a Twist, February 2019, University of Jyväskylä.

'How to win at being a student', Identity, Community and Social Solidarity: BSA Annual Conference, April 2018, Northumbria University.

'Absent pilot' at Edge Poetics, a Symposium on innovative and speculative creative writing practices in Higher Education, University of Bedford.

'Like a ghost out of nowhere' at Multi-voices in Research: Co-Interpreting Art and Architecture, East Street Arts, Leeds.

'The liminoid and the student experience of Higher Education' at Folklore from the cradle to the grave: The Folklore Society Annual Conference, Edinburgh.

'Case study' at The Experience of AHRC-funded Early Career Researchers in Themes and Programmes, AHRC, hosted by Birmingham City University.

'Spock, neoliberalism and one other alien' at The Anti-University Festival, London.

Roundtable in Humanities and Beyond: Exploring the Frontiers of Interdisciplinarity, University of York.

The sting of intoxication at Fluid Physicalities, Birkbeck, University of London.

I am a Director of Bloc Projects, the contemporary art gallery in Sheffield.

My essay-based creative practice has resulted in commissions for a number of creative artists, such as Matt Stokes for a show at Site Gallery in Sheffield and Florian Roithmayr, to accompany shows in Brussels, Sheffield and London.

For three years, I was on the panel of judges for a national book award.

My press, Spirit Duplicator, operates between the USA, UK and Switzerland. I have recently produced books for Theatrum Mundi, which launched at the 2017 Edinburgh International Book Festival.

I co-convened the Student Experience Network for the SRHE for five years.

I have given many papers at international conferences and seminars. I was invited to lecture at the University of Tartu in Estonia in 2015.

I collect records and books!

Cheeseman, M (2018) 'Like a ghost out of nowhere' in Multivoices in research: a script by researchers, London: Sprit Duplicator.

Cheeseman, M and Forrest, D. (2018) ‘The narrative nightclub: British cinema and the dance floor’ in Bentley, N, Johnson, B and Zieleniec, A (eds) Youth subcultures in fiction, film and other media: teenage dreams, Palgrave Studies in the History of Subcultures and Popular Music, Basingstoke: Palgrave Macmillan.

Cheeseman, M (2018) ‘How to win at being a student’ in Higher education and social inequalities: university admissions, experiences and outcomes edited by Waller, R, Ingram, N and Ward, MRM, London: Routledge.

Cheeseman, M (2018) 'On going out and the experience of students' in Students in Britain and Ireland, edited by Burkett, J, London: Palgrave Macmillan.

Cheeseman, M. (2015) ‘Who groks Spock? Emotion in the neoliberal market’ in Resist! Against a precarious future, edited by Ray Filar, London: Lawrence and Wishart, p. 134–141.

Cheeseman, M. (2012) 'In the Dead of the Night' in Radical Futures 2, edited by Coatman, C. and Shrubsole, G., London: Lawrence and Wishart (in association with Soundings Journal).

Hammond, N., Cheeseman, M., Chantry, A. and Peng, A. (2015) ‘Visual methods, surviving cancer and sexuality: a reflection on negotiating ethical issues and developing academic/artistic partnerships’ in Journal of Families, Relationships and Societies 4 (3), p. 483–492.

Cheeseman, M. (2008) 'The impact of a 24 hour library on the student experience at the University of Sheffield' in Anthropopages, No. 7–8, Groupe de Recherches et d'Actions en Ethnologie et en Anthropologie, p. 125–137.