Two students from the University of Derby have been recognised by the Worshipful Company of Framework Knitters for their innovative knitwear designs.

Kate Myerscough and Megan Scott-Jenner, who are both in their final year of studying BA (Hons) Textile Design at the University, faced strong competition from textile design programmes across the UK, including post-graduate courses, in the Worshipful Company’s Student Bursaries and Awards scheme. The winning pair will receive a total of £4,000 in funding and will also benefit from mentoring from an industrial consultant through the company.

The scheme, which began in 1985, aims to encourage students in further and higher education to take an interest in the knitwear industries by entering an annual competition for bursaries and awards funded by Liverymen and the Company’s associated industries. 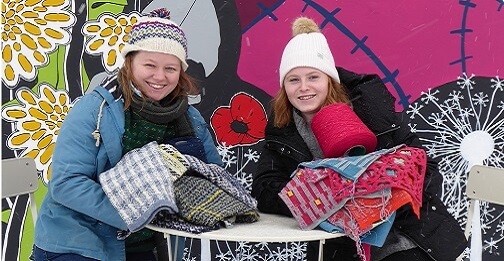 Kate received the Howard Russell Ellis Award which includes a bursary of £1,500, and Megan won the HATRA (Hosiery and Allied Trades Research Association) bursary worth £2,500. Both will be invited to the Company’s Livery Banquet to receive their certificates later in the year.

John Angus, Principal Lecturer in Design at the University of Derby, said: “We are thrilled that two of our students have been awarded Worshipful Company of Framework Knitters bursaries and awards. The level of competition for this scheme is extremely high, so to be selected as one of the winners is a fantastic achievement and demonstrates the hard work of these students.

“Although the financial support that these talented designers have attracted is a tremendous boom, the strategic guidance and endorsement from industrial experts of the highest level is absolutely priceless.”