‘Rarest stonefly in Europe’ rediscovered in UK after 22 years’ absence

A critically endangered species of stonefly – thought to be extinct in many European countries – has been rediscovered in North Wales by a team of researchers at the University of Derby, after 22 years’ absence in the UK.

The Scarce Yellow Sally Stonefly (Isogenus nubecula) is one of the rarest stoneflies in Europe and it’s rediscovery in the River Dee at Bangor-on-Dee, which marks the westernmost point where it has been found.

The species was once common across Europe, but its widespread disappearance was noted in the second half of the 20th century, with no individuals recorded since 1936 in Austria, Belgium, Switzerland and the Netherlands. It is also thought to be extinct in the Czech Republic and Slovenia, with just a few surviving populations in pockets of eastern Europe. 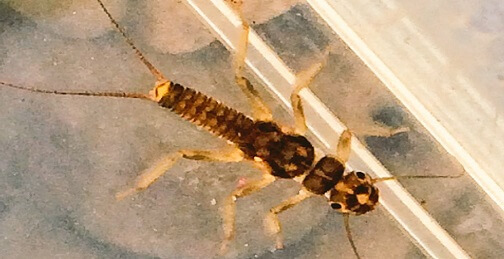 In the UK, I. nubecula was first recorded in the River Dee in 1959 and the population was confirmed at a number of sites in surveys carried out in the 1980s. By 1995, however, numbers had significantly decreased and a survey carried out that year found only one nymph in the river. No further specimens were discovered for another 22 years, despite repeated surveys since.

In the most recent, carried out at Bangor-on-Dee and Erbistock over two days, 14 individuals were caught and confirmed as I. nubecula after DNA analysis by the University’s dedicated Aquatic Research Facility, thought to be the only facility of its kind at a UK university.

Dr Michael Sweet, Associate Professor in Aquatic Biology at the University of Derby, collaborated with the Freshwater Biological Association, the Natural History Museum and Ty ‘n Berth on the discovery. He said: “The rediscovery of the Scarce Yellow Sally Stonefly in the River Dee is of European significance and its conservation is of paramount importance on many levels.

“Stoneflies are an important food source for many species, from fish to a wide range of birds. Moreover, they have an essential role in the river ecosystem as collector-gatherers, scrappers, shredders and predators.

“This species could therefore be a potential candidate for a captive breeding programme, with individuals reintroduced into previously known and still suitable habitats in the River Dee and the surrounding catchment area.

“This could make a significant contribution to safeguarding the future survival of this species in Europe.”