Mother and daughter celebrate 70 years of occupational therapy in Derby

This year marks 70 years of occupational therapy education in Derby, and for one mother and daughter from the city, the profession has become a family tradition. 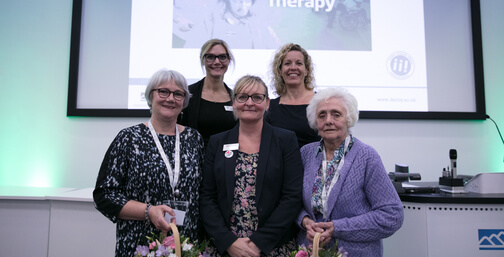 Joy Bramley was one of the very first cohort of occupational therapy students at Miss Fitchett’s Derby School of Occupational Therapy, which opened in 1948. She joined in 1949 at the age of 18 after seeing an advert in the Derby Telegraph.

Over thirty years later, her daughter Sally followed in her footsteps, starting a two-year accelerated diploma occupational therapy course at Derby in 1983.

It was her mother’s generation that laid the groundwork for modern occupational therapy, developing many of the techniques and practices that are still in use today.

As Joy explains: “We were always told we were pioneers. The war hadn’t been over for long, the NHS had only just been established and many of the girls were the first occupational therapists the hospitals had ever seen.”

Sally agrees: “The pioneering spirit is still there today, which I think is due in part to the fact that we are often the single professional of our kind on the team and we sometimes have to be resilient and innovative. We owe a lot to those early trailblazers like my mum, who was responsible for so many firsts in her career, and who left us a great legacy to follow.”

When Joy joined, the course initially focused on craftwork as a means of rehabilitation, with the first year spent at the Derby School of Art. Students produced samples of every craft by day – weaving, toy-making, basketwork, rug-making and glove-making – then attended evening lectures in clinical practice.

Joy said: “For us, necessity really was the mother of invention. We had to be multi-skilled at helping people to return to normality or as much of normality as possible. One woman I worked with loved to read but couldn’t turn the pages of her book. We fashioned a doweling rod with a magnet on the end, then added paperclips to 30 or so of the pages so she could turn them using the magnet. We’d get Boy Scouts to help out, and as she moved through the book, they’d replace the paperclips!

“As therapists, we were able to really stretch our wings, developing a lot of new skills and practices which laid the foundations for today’s techniques. We were problem-solvers, facilitators – and unlike a lot of other medical professions at the time, we were trained to see the person as a whole and work with both the physical and mental health aspects of their condition.”

In 1967 Joy was invited by Miss Fitchett to join the staff at the Derby School and stayed there for 11 years, including nine as deputy principal. She was on the Board of Studies, helping to shape the future of occupational therapy and under her guidance, the school continued its pioneering work in the field, sending students out to children’s homes and new areas within the hospitals, such as gardening, domestic and catering departments, to experience work roles.

Starting her career in occupational therapy in the 1980s, Sally sees a lot of differences between her mother’s day and now, but there are also similarities: “Some of the academic subjects we studied have the same basis and there has been a broadening and deepening of the therapeutic activities we use. Although we do still use some craft and social-based activities in therapy, the techniques we use are evidence-based and the scientific and research side of the profession has grown as the programmes have developed into degree courses. Some of the core principles haven’t changed at all since the early days though – we still view the person as a whole.

“The biggest difference is that my mum’s career started in institutions where people were generally detained and segregated, whereas now in mental health the focus is on supporting people’s potential, aspirations and recovery, usually in their own homes. There is still a way to go to beat stigma in mental health but we have come a long way in society.”

In 1992 the Derby School became part of the University of Derby and by 2002 had developed postgraduate masters’ programmes for occupational therapists. In 2007 the Occupational Therapy department moved to Britannia Mill and Kedleston Road.

Over the last 70 years, the programmes have been responsible for more than 4,000 graduates, including leaders in their field Dr Katrina Bannigan, Dr Ann Wilcock and Ann Lawson Porter, Vice-President of the Council of Occupational Therapists in European Countries (COTEC). Derby graduates continue to influence the profession, both at home and globally, in education, research, health, wellbeing, social care and policy.

Joy and Sally were invited back to the University to share their experiences with current students and attendees at a special event held on 26 April to celebrate 70 years of occupational therapy education in Derby.