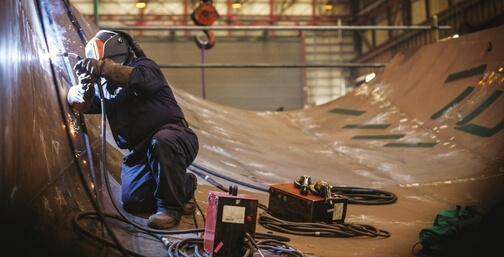 Robert Ward, who graduated with distinction from the University’s very first Behaviour Change Masters programme in November, is a full-time Safety, Health and Environmental (SHE) Advisor at BAE Systems. For his final year degree project, he studied skincare behaviours among its workers.

The project was based on a real-world problem: workers weren’t using the protective skin creams provided by the company, designed to prevent contaminants from entering the skin and moisturise after a day’s work. Handling steel plates and equipment can damage the skin, leading to infections and other issues.

Supported by leading occupational skincare supplier Deb, Robert designed a multi-faceted approach to integrate skincare into daily life, holding an initial focus group to explore why workers were not using the creams. He also developed a communications campaign involving posters, toolbox talks and product demonstrations to illustrate the benefits of the creams.

Robert said: “I’ve worked as a SHE advisor at BAE Systems for the past 10 years and my project was based on a real area of concern. My challenge was to understand why workers weren’t using the skin care creams provided and to change the behaviours of employees and supervisors.

“We recognised that in order to remind employees about skincare, we had to restructure their working environment. We moved the dispensers to the areas where the workforce met for their daily pre-work briefings and sought to make them highly prominent by installing brightly coloured dispenser surrounds. We also asked the supervisors to issue daily reminders at these briefings to publicly demonstrate that skin care was important to the company.”

Over just eight weeks, the changes led to an 84 percent increase in combined skincare cream usage.

Jon Coneybeare, SHE Manager at BAE Systems, said: “Robert’s study has transformed the way we approach the whole issue of proactive skincare management. It demonstrated the importance of engaging employees and understanding their perceptions and work routines before designing interventions. Indeed, it demonstrated that behaviour change principles really do work and we’re looking to expand this approach to other areas of significant risk.”

As a result of Robert’s findings, Deb also changed their approach to skincare across their global operations, focusing on working with businesses to understand their employees’ daily routines and perceptions about creams to increase the likelihood of their usage.

Robert concluded: “For me, the success of the project demonstrated that the principles taught at the University of Derby really do work and that there are techniques that safety practitioners can apply to influence safer behaviours. At the end of the day, we all want to go home in the same healthy state as when we arrived and I’m delighted if my project helps employees to achieve that.”