A student from the University of Derby has won the Best Camera Work category at this year’s Royal Television Society Awards for her outstanding work on her 3rd year film, Teafe - Life For Tea.

Producer/Director Xiaoying Yan is an international student from China and was initially nominated in the Best Factual category. Her film was also selected by the judging panel to compete in the Best Camera category.

Media Production Programme Leader Phil Basi, said: “This is a great achievement for Yan and the course, highlighting that we can produce award winning students with high calibre skills.”

Xiaoying Yan added: “I can’t believe that I was shortlisted in two categories and then to actually win one was beyond my dreams, this would not have been possible without the support of the staff and students at Derby University.” 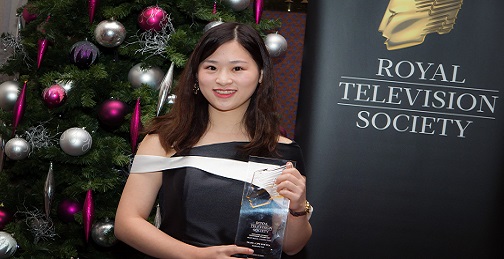 This is the third year running that films from the Media Production degree programme have been shortlisted in the RTS Awards and the second year running that they have won the best Camera Work category, something that no University has ever achieved.

Yan’s production faced stiff competition from across the whole of the midlands. These nominations further strengthen the course’s position as a power house for Media Production education in the UK.

Yan’s film is a documentary based on a true story of a young man’s struggle to become a Tea Master, overcoming his disability to achieve his dream.

Find out more about studying Film and Media at the University of Derby.