A team of UK aquatic biologists have induced coral spawning over a full reproductive cycle for the first time by successfully maintaining the environmental conditions of coral reef environments in closed system aquariums.

Researchers from the University of Derby and the Horniman Museum and Gardens in London designed two aquarium systems which mirrored the natural conditions of the Great Barrier Reef and the coral reefs of Singapore.

The aim was to induce, for the first time, coral spawning – or sexual coral production – in an artificial environment to see if it was possible to break natural spawning rhythms – a result which could lead to the possibility of year-round reproductive events and support large scale coral reef restoration efforts.

With careful monitoring, the team successfully induced spawning of four different species of coral over a full reproductive cycle.

Jamie Craggs, Aquarium Curator at Horniman Museum and Gardens and PhD student at the University of Derby, who led on the research, which is part of Project Coral, said: “Despite over three decades of research into spawning biology in reef building corals, to the best of our knowledge, there have been no successful attempts to date to maintain environmental conditions and natural spawning coral in closed system aquariums over a full reproductive cycle.

“A huge amount of work went into ensuring we had the correct environmental settings for the corals, from lighting to temperature, and we are extremely pleased with the results.

“The design and success of our study will allow other researchers to produce large numbers of coral larvae and juveniles for other experiments in a wider range of locations than previously thought – all in the hope of restoring our coral reefs, which are under threat from climate change, overfishing and pollution.” 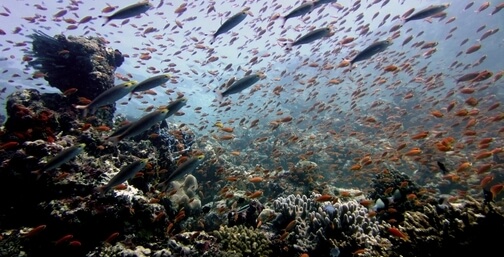 Project Coral has partners around the world working together to predictably spawn corals in captivity, in order to investigate, counter and repair the impact of climate change on coral reef health and reproduction.

To conduct the research, coral fragments were collected from Singapore and the Great Barrier Reef and shipped to the UK. The team used four different common coral reef building species from the two geographical locations, keeping them for more than one year to allow the coral to complete two full reproductive cycles.

Two purpose built aquarium systems were designed and built at the Horniman, one for each study location, and were set with replica water, temperatures, lighting and water movements, mirroring in real time the conditions on the corals’ parent reefs.

For many corals, the time of spawning correlates strongly with a number of environmental signals including seasonal temperature, lunar and migration cycles.

Robust studies examining the roles of these cues in triggering spawning have been lacking until recently because it had not been possible to predictably induce spawning in fully closed artificial settings.

The results from this current study show that the coral from Singapore exhibited the closest synchronisation to wild spawning; with all four colonies releasing sperm and egg cells in the same lunar month as the tagged parental colonies remaining in the wild.

The exact spawning date of the corals in the aquarium was able to be predicted based on the stage of egg development, which was monitored regularly, and the predicted wild spawning date for each location. One hour prior to this predicted spawning time, the aquariums were isolated from the filtration systems and floating collection rings were placed in the tanks to collect eggs and sperm.

Dr Michael Sweet, Associate Professor in Aquatic Biology, said: “This is a breakthrough for coral reef research and the success offers unique opportunities to various universities and institutions on a global scale, with increased accessibility to larvae and newly settled corals for research and reef restoration efforts.”

He added: “It is possible that with tweaks to the current method, such as adjusting the nutrition content available to the corals, the percentage of successful colony spawning can be even further increased.

“We are now also able to experiment with hybrid crosses of coral species, something which is likely to be more common in the wild than we currently understand. In this regard we can now, in controlled conditions, assess variation in survivorship of these crosses compared to their parental colonies, which will also shed light on specific pathways associated with genetic inheritance.

“The upscaling of aquarium systems as reported here has the potential to support large scale coral reef restoration efforts by increasing the frequency that genetically diverse coral larvae are available for transplantation back onto damaged reefs.”