Buxton’s Devonshire Spa at the University of Derby Buxton Campus has been shortlisted in the Good Spa Guide Readers’ Choice National Awards 2017.

The spa, based in the historic Devonshire Dome, has been listed as a finalist in the Best Customer Service category and is up against high profile spas including Center Parcs’ Aqua Sana Whinfell Forest and Longleat Forest resorts.

The spa is the first of its kind in the world to run on commercial lines, giving students aiming to make a career in spa management the best training in a real world learning environment. 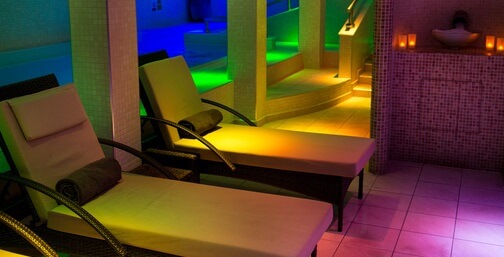 Isobel Stockdale, Head of Spa and Tourism at the University of Derby, said: “This is fantastic news for our staff, students and guests.

“It is testament to the high-quality work we are doing in terms of real-world learning for our students, alongside running a successful commercial spa. The calibre of nominations is superb, so to be able to compete alongside high-profile names is a real success for us all here at Buxton.”

Guests of the Devonshire Spa can enjoy full use of the first-class thermal facilities which include a hydrotherapy pool, reflexology foot baths, aroma room, ice fountain, essence-filled sauna, steam rooms and a relaxation lounge. The spa also has a traditional Hammam room.

Sian Jones, Spa Manager, added: “We are delighted. We pride ourselves in our unique spa on our guest service and aim to always exceed expectations. As a small spa, to be featured amongst such prestigious spas is wonderful.

“This nomination adds to a successful list of accolades the spa has received over recent years and really helps to put Buxton on the map as a destination for excellence in spa and wellness.”

The Good Spa Guide will be awarding the Readers’ Choice National Awards 2017 trophies on Tuesday, November 14.