One of the last surviving holocaust survivors, Bernard Grunberg, visited the University of Derby ahead of the Holocaust Memorial Day (January 27) to talk about his experience as a Jewish boy during the rise of Nazi Germany. 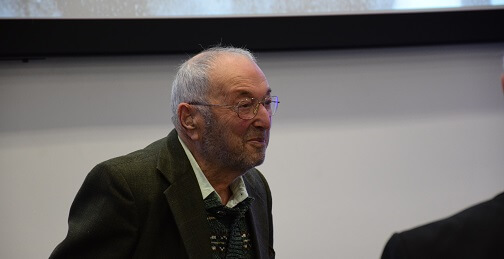 During the event Bernard shared with students his experiences before he left Germany and how he built his life in England.

Bernard was born in March 1923 in Lingen, Germany, ten miles from the Dutch border.

As he progressed through school, Bernard experienced the rise of anti-Semitism and within two years it had become unbearable for him. He said: “I lost my friends, my playmates. They bullied me mentally and physically for being Jewish.”

It was at the age of 15 that Bernard travelled to England on the second Kindertransport and was sent to an empty holiday camp in Lowestoft in December 1938.

He was the only member of his family to leave Germany, as his father, mother and sister were all murdered by the Nazi regime.

Reflecting on his last thoughts of leaving Germany, Bernard said: “I didn’t actually realise I would never see my family again. Nobody told me of my future.”

Bernard’s visit marks this week’s Holocaust Memorial Day with this year’s theme “How can life go on?” being demonstrated by Bernard’s exploration of his life, not just in Nazi Germany, but also in Britain.

“Tears come when I hear anything about the Holocaust. I let the tears fall and then I can cope again”, added Bernard.

Now, at 93, Bernard is a frequent speaker at The National Holocaust Centre and Museum in Newark, telling his story to hundreds of people each year.

In his final words of the evening, Bernard said: “I am as happy as I can be. I’m alive. I was allowed to live. Britain saved my life.”

“He made us laugh and he made us cry, but most of all he made us think. It was a great opportunity for our students to hear first-hand from such an inspiring figure.”

Below is an interview with Bernard filmed by the University of Derby Learning Enhancement team.

You can see Bernard's talk at the University below: