A partially sighted student has developed a software package that will read mathematical symbols and formulae to help other visually impaired (VI) people.

Jack Fisher graduated at the University of Derby’s Award Ceremonies earlier this month (Thursday, July 14) with a First Class Honours degree in Mathematics.

The 22-year-old from Gibraltar, produced the ‘Maths Screen Reader’ to enable VI students ‘read’ mathematics, as his final degree project. The interactive software can interpret content using pattern matching procedures, and then ‘read it out’ in a manner similar to that of a human.

The application, called MSR (Maths Screen Reader), can be developed further to make it easier for VI students, both at school and university, to receive, internalise and understand mathematics. It could, for instance, include extending the range of input file types handled so as to accommodate Microsoft and PDF files, and possibly picture files such as JPG and PNG.

Speaking about his time at university, Jack said: “It is a huge success to have completed the BSc Mathematics with First Class Honours. I feel a great sense of achievement and my mathematics skills have developed enormously during the last three years.

“I do face challenges with reading, writing and having access to adequate software but I had heard that the University of Derby had an excellent reputation for supporting students with disabilities and after attending several open days, I made them my first choice.

“I have received excellent support from my lecturers and support staff at the University and thoroughly enjoyed every minute.” 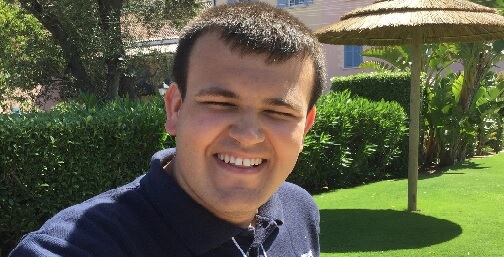 Professor Peter Larcombe, Programmes Leader for Mathematics at the University of Derby added: “Jack has been fully engaged in all classes and tutorials, and taken on extra student representative duties to mentor and encourage other students. It is to his immense credit that he has steadfastly refused to succumb to his difficulties or allow them to affect his work.

“He has successfully navigated his way to completion of the BSc Mathematics degree with First Class Honours. Determination and perseverance have been the hallmarks of Jack's time at Derby, throughout which he has been a pleasant and amicable character who has maintained a keen sense of humour and showed real passion for, and commitment to, his chosen subject.

“Jack’s final year project prototype tool is a terrific and quite novel piece of work. It has commercial potential if enhanced and improved accordingly and, to that end, Jack is remaining at the University of Derby to begin a PhD programme based on this particular project.

“It has been a privilege for us to assist Jack in his studies, and in many ways he has been a model student. We wish him well, and look forward to his continued presence around the University campus.”

Jack will return to the University of Derby in September 2016 to study for a PhD in Human Computer Interaction, where he will specifically research how it can be used to aid the visually impaired and blind in the field of mathematics.

Find out more about studying Mathematics at the University of Derby.