A group of students from the University of Derby hosted a talk to discuss and address the Calais refugee camp crisis.

15 students attended the seminar titled ‘Researching Environmental Health Conditions in the Calais Refugee Camps’ on February 3, 2016 which was part of a series of seminars hosted by Human Biology students at the University.

David Arrowsmith is the student who initiated the talk, he said: “The society offers monthly guest lectures from notable academics, on relevant and topical subjects.”

The society, which started in September, 2015 with the University’s Students’ Union, regularly holds events inviting external researchers into the University. 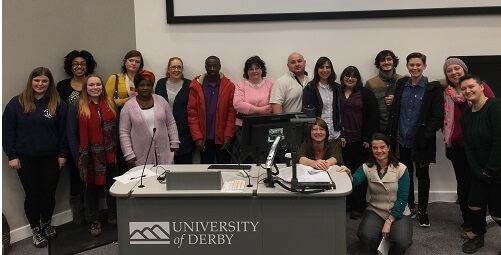 Dr Surindar Kishen Dhesi, Lecturer in Occupational Health, Safety and Environment at the University of Birmingham, visited Derby to present at the event after visiting the Calais Refugee camp in July with Dr Arshad Isakjee and Dr Thom Davies.

Dr Dhesi added: “It was an honour to be the inaugural speaker for the Human Biology Society, I have done my best to share the findings of our research in Calais so I can raise awareness of the appalling environmental health conditions there.

“It’s great to see the students being so engaged and proactive and using the society to learn outside of their studies.”

Pete Warren, who attended the seminar and studies Popular Music with Music Technology at the University of Derby, said: “It was a very interesting and insightful session that shows how action is being take in various forms and that there is hope for a better future in the camps.”