University of Derby has role in expanding tourism industry in the Peak, says Minister

University of Derby students have a vital role to play in the Government’s plan to expand the Peak District’s tourism industry, Secretary of State for Culture, Media and Sport Karen Bradley has said.

She told the Marketing Peak District & Derbyshire’s 2016 Tourism Conference & Exhibition in Buxton that tourism was one of the UK’s most important industries – and that the Government was firmly committed to growing the sector outside London.

“We all know that attracting tourists, and making them want to come back for more, is harder than it sounds, even for an area as special as this,” said the Staffordshire Moorlands MP, who grew up in Buxton and now lives in Leek.

“Thanks to places such as the Peak District and Derbyshire and people like you, 2015 was a record-breaking year, with tourism contributing more than £62 billion to the UK economy,” she told the conference, whose sponsors included the University.

“The latest post-Brexit figures suggest this trend is set to continue, with the number of overseas visits to the UK in July and August 2016 up two per cent on the same months last year.”

However, more than half of international visitor spending was concentrated in London – which is why the Government was investing £40 million in the three-year Discover England Fund to help grow tourism outside the capital.

“I am delighted that Marketing Peak District & Derbyshire has been successful in securing £240,000 between them in a joint bid with teams from Cheshire, Essex, Hertfordshire and Kent,” she said. 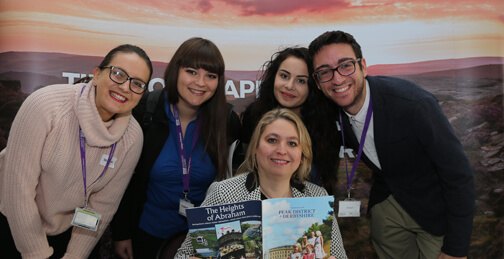 Other projects included supporting, through £24 million from the Heritage Lottery Fund, the regeneration of Buxton’s Grade I listed Crescent and promoting England’s national parks, including the Peak District, as world-class destinations.

This included developing new apprenticeship standards and educational opportunities to maintain the skills needed to service the industry locally: “I look forward to working with the University of Derby and Buxton and Leek College to make sure we make a success of this,” she said.

Dr Sarah Rawlinson, Head of Hotel, Resort and Spa Management, said: “Meeting the Government minister in charge of the UK’s tourism industry demonstrates the depth of Derby’s involvement in the real world through its sponsorship of events like this, which also give our students access to decision-makers locally and regionally.

“When they graduate, this means they have a ready-made network of contacts for the future.”