A mother and daughter are celebrating a fistful of firsts as they graduate from the University of Derby - on the same day and in the same subject.

Not only did Chris and Anika Drews study together full time, but their Ecotourism BSc degrees are the first of their kind in Europe.

Chris, who left school in 1976 and who had never studied beyond O-levels before, will graduate with first class honours on November 12.

Chris and Anika (34) spent three years together at the University’s Buxton Campus, learning how to be managers of the future in ecotourism, one of the fastest growing sectors in the visitor industry worldwide, as conservation and sustainability move towards the top of tourists’ priorities.

Anika knew her mum, who organises a Peak District walking group, shared her interest in the countryside, so when she signed up for the course, she suggested she do the same.

“I had no concept of what going to university meant,” said Chris, who left school at 16 and was now in a stifling, but skilled job with no prospect of advancement. Just ten weeks after applying, Chris was at her desk in the BSc class, learning study and research skills from scratch, as well as the subject matter.

“At the age of 56, to end up with a First is quite overwhelming,” said Chris. “The chance to do this was like a gift from the gods – a 'golden opportunity'. Now, opportunities are opening for me which I never would have had before.”

“We weren’t just mother and daughter, we were equal students, classmates,” said Chris, who lives close to her daughter in the High Peak town of Whaley Bridge. “Sometimes we sat together, but then she got her mates and I got mine!”

Anika, who juggled her studies with being a mother of four children aged from 15 to five, has achieved a very creditable 2:1. 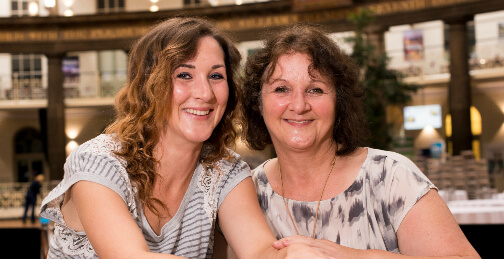 “It’s been quite a struggle, but the University is like a family,” she said. “They adapt themselves to everyone who comes to them – it’s quite a talent. They make so much time for you, it’s like you’re the only person in the world.”

Sometimes, while she was at home with the children, her mum was out with their fellow students. “I thought: there’s something wrong with this picture, Mother!” she joked.

But the change in her mum was wonderful to watch, said Anika: “She’s thrown herself completely into it.”

Chris is now looking forward to using her knowledge of conservation and sustainability in a career in tourism, or land management.

“We have nobody co-ordinating ecotourism in this country,” she said. “It’s bizarre, especially in the Peak District which is the largest and most visited national park in the UK.

“The notion of sustainability isn’t just a throw-away line any more – it’s become ingrained in everyday behaviour such as recycling, promoting the environment and economic viability.”

The guiding principle of ecotourism, known as The Triple Bottom Line, is that its operations must benefit the people, the environment and the local economy. Businesses across many industries now use it as their credo.

“It’s all connected, and it’s even more important that ecotourism as a subject and a form of travel, continues to inform other industries,” said Chris.

Although Ecotourism is no longer a stand-alone degree at Derby, its principles have been incorporated into its highly regarded Tourism courses.