University invests in the future of entrepreneurial graduate

The University of Derby has invested in lorry advertising from DrivenMedia which is owned by graduate Edward Hollands.

Last year Edward set up his business supplying advertising space on lorries after saving thousands of pounds while working at a supermarket.

He came up with the idea to display adverts on the side of HGV trucks in a bid to help struggling logistics companies create additional revenue streams.This service allows companies to take advantage of the UK’s densely populated roads and motorways to target commuters.

And now, the University of Derby has invested in an advertising campaign with DrivenMedia to advertise all over the country.

The hanging on the curtains took place last week and the lorries are now touring the country.

Edward added: “The University of Derby has been fantastic. Staff were involved and encouraging throughout my studies. Since my graduation, they have kept in touch and continued to provide practical support to me in my venture. To top it off, they saw the potential of my lorry advertising and became my client.” 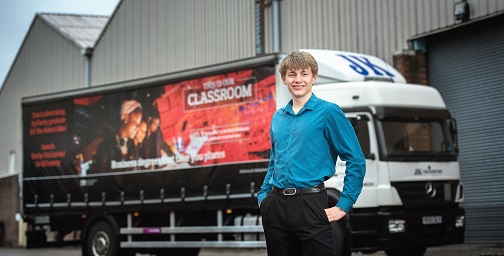 Edward, who lives in Derby, launched his business just four months after completing his studies.

He started by contacting logistics firms which he had spotted on the A38 in Derby and enquired about whether they would be interested in having adverts displayed on the side of their fleet.

Of those which agreed, he ordered ‘advertise here’ curtains before selling the space to advertisers.

Edward manages more than 300 trailers across the UK, designing adverts and buying curtains for the side of the vehicles to help advertise different products and companies.

Jenny Baldwin, Recruitment and Marketing Manager for the College of Business at the University of Derby, said: “It’s fantastic to see Edward doing so well and it’s great that we can now be his client and hopefully help him grow and develop further.”