The University of Derby hosted an ‘An Evening With Jacqueline Gold CBE’ as part of their Women in Business event, on February 25, 2016.

The evening brought together high profile figures, to debate and explore what UK businesses are doing to create opportunities for women.

Professor Kathryn Mitchell, Vice-Chancellor at the University of Derby, opened the event by chairing the panel debate.

During the debate, Lisa Biesty, Commercial Director, Derby County Football Club, said: “Events like this are extremely important. Businesses like Derby County Football Club and the University have a duty to continue to address their path in addressing this issue and have made great progress, proven with the number of women in key management and executive roles. We must encourage all businesses to do the same.

“The education of our next generation of business leaders is key, so that one day inequality in the workplace isn’t even an issue that has to be raised.

“I do believe that if businesses take responsibility for recruitment and importantly recognition of talented women in the workplace regardless of personal choices we can achieve the ambitious challenges of 50/50 equality by 2020 set out by the Commonwealth.”

After the panel debate and networking, Jacqueline Gold CBE, Chief Executive of Ann Summers and Knickerbox, who is renowned for managing a company run by women, for women took to the stage to talk through her journey to the top.

Jacqueline began her career at the age of 21 when she started working for her father’s company, Ann Summers. She told her story about how she has taken the company from strength to strength, implementing the Ann Summers Party Plan, launching the first Ann Summers high street store in 1993 and an ecommerce site in 1999.

She said: “I had no business experience or formal training when I started out in business but I was passionate about my idea. I took the concept of home parties and pitched it to an all-male board. After initially meeting resistance from the board, I demonstrated how the party plan concept was a viable one and was eventually given the go ahead to launch the concept.” 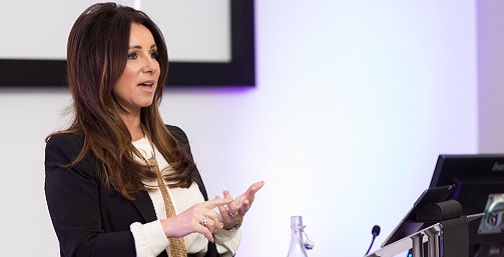 Thanks to Jacqueline, Ann Summers is now a multi-channel retailer with a gross annual sales turnover of over £150 million, with 140 UK and Ireland stores, 7,000 party planners, a thriving online business and partnerships with brands including: ASOS, House of Fraser and Shop Direct.

Jacqueline added: “When I started in business 35 years ago it was a man’s world and it was tough, it still is tough but more needs to be done to tackle this issue. Events like this are so important to address the issue.”

Jacqueline’s parting words to the audience were: “If a shy, naïve 21-year-old, who had no business experience, can walk into a room of grey-suited men and then go on to create a multi-million pound global business, because of the courage and will to succeed, then believe me you can!”

Jacqueline has received many accolades, including:

Kathryn Mitchell is the University’s first female Vice-Chancellor and is one of 21 female Vice- Chancellors in the UK. She said: “It’s incredibly important for us to run events like this, it’s a great opportunity for our students and guests to hear from the inspirational panellists and Jacqueline Gold CBE. Each and every one of the speakers, had a very different story and experience to share, which was very insightful both for me and the audience.”

The Women in Business event is part of a new programme of public events organised by the University of Derby. On March 11, 2016, local figures including Transport Secretary Patrick McLoughlin MP and former Foreign Secretary Dame Margaret Beckett MP, will take part in a debate on Britain’s membership of the EU.

International speaker and University of Derby honorand Richard Gerver will be hosting ‘An Evening With’ on April 21, 2016.