Team Derby have announced the signing of three champion international badminton players, in the run up to their third National Badminton League (NBL) season.

Dutch Doubles Specialist, Jacco Arends, who is currently training for Rio 2016 and ranked 17th in the world, will join the University of Derby’s NBL franchise team for the 2016-17 season.

After final and semi-final appearances in the Brasil and the European Championships in France, Arends secured enough ranking points with partner Selena Piek to qualify for this year’s Olympic Games.

He said: “I’m really looking forward to my first season in England. I think the NBL is a great league with a lot of potential and in the coming years its quality will only improve. I want to be part of that and add some freshness and energy to the league.”

Nohr was also quick to mention the influence of Coach Donna Kellogg in his move and her pivotal role in attracting the best badminton talent to the East Midlands, adding: “Team Derby was a good choice for me. I talked to Donna months ago, and she told a bit about the team and the structure. We share some of the same values and I think I’ll fit in well with the rest of the team.

“As a team we have high ambitions and are not satisfied with silver. This is a crucial point for me, I always want to be the best, and nothing below is good enough.” 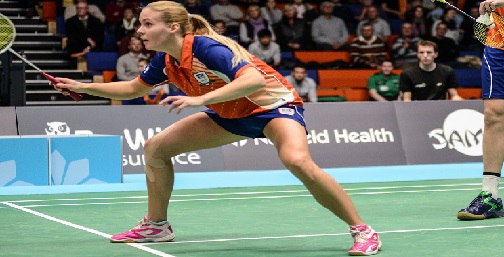 Swedish Doubles specialist Amanda Hogstrom, who joined Team Derby last year and currently ranked in the top 50 pairings in the world, has also re-signed for another NBL season.

Speaking about her signing, Hogstrom said: “Last year was really fun, I loved playing in the UK and in front of the TV cameras for Team Derby. The crowd really get behind the team and that’s one of the reasons why I’m coming back to Derby.

“Seeing the improvements we’ve made this summer has got me excited for the new season, I really think we’ve got a great chance of winning the league like the team did two years ago and to be a part of a winning team would be incredible.”

NBL Franchise Director, Ollie Shearer, added: “It’s fantastic news to have Amanda back, her level of play and overall presence around the squad was first class so we’re delighted to see her return for another NBL season.

“We see Amanda’s involvement go way beyond that of her play on court. As a fans favourite we’ll be bringing Amanda and our badminton community closer together, so we’ve got some great plans going forward for some fantastic events that she’ll be a major part of.”