Music-lovers will be given a preview of Derby’s emerging musical talent when students take to the stage at Derby Theatre tomorrow night (May 13).

Popular Music and Music Technology students at the University of Derby will be performing a diverse mixture of rock, pop and acoustic tunes at the 2016 Music Showcase.

The event is the first to kickstart the University’s Big Show – a series of live events and exhibitions across the city showcasing the degree work of final-year arts, engineering and health and social care students.

And among the musicians to take to the stage will be acts including punk rock band Polar Pyramids, Stoned Olives and Zero Below.

Andrew Goldwater, a guitarist in Zero Below, said he was excited about showcasing his band’s original music to the public.

He said: “The music we will be playing is very eclectic. We will be playing four tracks which we have written together; one is metal, another is more modern alternative rock metal, the third is indie rock and the final song is our take on 60's rock – they’re all forms and sub-genres of rock n roll.

“I'm looking forward to the Music Showcase because it's likely to be the last time I get to play with my colleagues on this course as we all have different plans for the future. 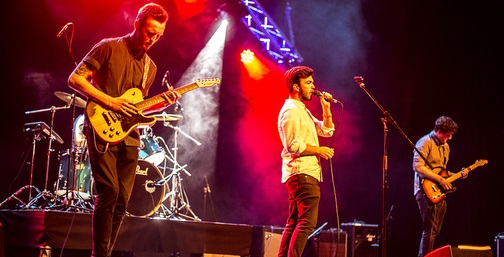 “Performing live is always a little bit nervous but usually after the first song you find yourself settling into things and end up enjoying it. It's a great feeling once the initial nerves settle down.”

On Saturday (May 14), Popular Music students at the University will be performing in guest support slots for the Lucy Ward Band at Derby Theatre. Tickets to the event cost £12.

Phil Baggaley, Lecturer in Performance at the University of Derby, said: “We always look forward to our Popular Music Showcase event.

“Music Performance is an integral part of the Popular Music Degree, along with many other creative skills our students have developed. This special evening at Derby Theatre will very much be a celebration of this.”