A student who was inspired to create a fashion collection after reading the diary entries of her great grandfather about his time serving in World War Two has won a prestigious award.

Sophie Kelman, who studies Fashion at the University of Derby, was so hooked on the stories told by Frederick Richardson of his time as a frontline soldier based in France, Germany and Belgium, she decided to focus her final degree fashion collection on creating military-themed garments.

The 20–year-old has designed four outfits targeting 25-45 year-old women who work in the creative industry.

Her collection, called Apathetic Journey, features four coats, a jumpsuit, cardigan, shirtdress, jumper dress, cropped shirt and a pair of trousers. She used screen printing to create paint splatters in four different locations on the clothing – to represent the four main arteries of the body.

And last night (Wednesday, June 1), at the University of Derby’s Big Show Fashion Show held at Derby Theatre, Sophie was awarded the accolade for Best Fashion Collection 2016 and was named runner-up in the Best Portfolio 2016 category.

Sophie, who is from Dorchester, said: “From reading my great grandfather’s diary I found out he was a frontline corporal soldier and drove a military truck transporting equipment.

“In his diary he spoke about his experiences and feelings, including when bombs exploded within metres of him and how he lost his mother. He wrote very clearly about the last time he saw his mother waving him off at the train station.

“After he joined the Entertainments National Service Association (ENSA), he was made into a sergeant. He met and married my great grandmother while he was serving. My great grandad died when I was three weeks old but my family still speak proudly about him.

“I wanted to turn the negativity and distress of the war into something positive, which is why I focused on creating an elegant and feminine collection.

“It is an honour to have won and I feel all the hard work and effort I put into the collection was worth it. My family are over the moon for me too.”

As part of the research process, Sophie, along with fellow student Lara Cresswell, have spent time exploring artefacts as part of a special mentorship programme at the National Army Museum, in London.

Last night the two students were awarded the National Army Museum Mentee Award 2016 at the Fashion Show, presented by Natalia Wieczorek, Senior Collections Access and Outreach Curator at the Museum. 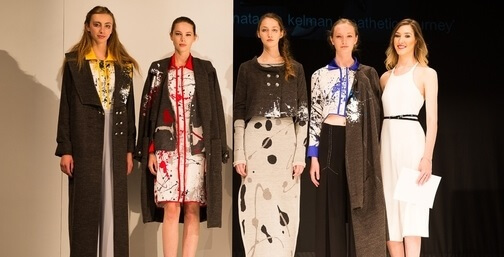 Lara, who also scooped runner-up for the Best Collection 2016, created a menswear collection, called Combat Utilised, which focuses on examining the relationship between the Second World War and the strength of the “common man”.

Her grandfather Jack also served in World War Two and was responsible for parachuting.

She added: “The theme throughout is a combination of the past’s connection with the present. The past has been influenced by British military wear during the Second World War and the present is based upon modern day shapes and structures.

“Historically, menswear has always followed set rules, standard garments such as trousers, shirts, coats, which traditionally are made from predictable fabrics. My collection pushes the boundaries from anticipated designs to futuristic, while remaining wearable.

“I am so happy that my work has been recognised. I am pleased with how my collection turned out and it was great to see it on the catwalk at Derby Theatre.”

The winner of the Best Portfolio 2016 was fashion student Chantelle Cassidy for her womenswear collection Façade, which focuses on the emotional connection of ‘putting on a front’.

She illustrated this through the use of brightly coloured garments, mirrored with a series of black garments.

Chantelle, 22, from Stafford, said: “What people show on the outside is not always a true representation of the emotions they feel internally. I thought this was an interesting concept which is why I decided to base my collection on it.

“I didn’t expect to win as so many other people’s collections were amazing! I’m very shocked but pleased.”

The award was presented by Managing Director of the Derbyshire-based fashion house, Christopher Nieper.

Maddie was presented with a cheque for £1,000 and a scholarship trophy after designing a sample collection of four garments for the over 50s female; one each for nightwear, eveningwear, daywear and travel wear.

Christopher Nieper added: “For us it was important to see how the students responded to the design brief which was a challenging one and asked them to consider in detail their target market, fabrics, shape, style and silhouette.

“Our winner Maddie has proved herself a very talented designer with great technical ability and we hope this scholarship helps open career doors for her in the future.”

Speaking at the Fashion Show, Huw Davies, Dean of the College of Arts at the University of Derby, said: “Apart from our student successes at many national awards and a range of collaborations with industry through live projects, placements and internships, the external profile of our courses has gone from strength to strength.

“Fashion secured the rare achievement of 100% this year in the National Student Survey, which is a real commitment to the dedication of our staff and the quality of teaching, and, only last week in the Guardian University Guide 2017, we were in the top three for fashion and textiles, another fantastic achievement.”

For more information about the Big Show, visit: www.derby.ac.uk/bigshow