An Illustration student who has created artwork showing the damaging effects not recycling can have on wildlife has won a top award.

Kaye Lindsay has created four illustrations, called Rejuvenation, showing a timeline of wild animals scavenging in rubbish to find food and shelter, eventually succumbing to the ‘human mess’ and creating their homes out of the recycling waste.

And now she has been named the first winner of the Illustration category of The Batsford Prize – an annual competition for all undergraduate and postgraduate students at UK institutions – which this year had a theme of ‘Reuse, Recycle, Reclaim.’

Kaye, who is an international student at the University of Derby, said: “My submission was based around nature and creatures, as they are ultimately the most affected by waste – our waste, in particular.

“In my illustrations, I tried to depict the concept that animals of all kinds are forced to take action themselves in order to revive their homes, due to the state our world is in.

“I’m truly grateful to Batsford for giving illustrators new opportunities by introducing the Illustration category and I am extremely honoured to be the first winner.

“The support and advice I received from my lecturers at the University of Derby helped me tremendously and gave me the confidence to take risks and expand my creative boundaries.”

She added: “The return of life, its vibrancy and beauty, is exactly what I set out to portray in these illustrations.

“In my work, colour represents life, and a potential future, a drastic contrast from the stark bleakness of the waste. The process of recycling and reusing the mass of waste, along with the rebirth of the tree, tells the story that any one individual has the ability to see potential in the rubbish.

“With the determination to reuse, recycle and reclaim, this individual can inspire a community. Each individual – each one of us – has the ability to initiate change.

“Beauty and potential are hidden everywhere, even under a pile of trash. We only need to look and be prepared to reclaim it.”

Hundreds of entries were submitted for the Fine and Applied Art, Fashion and Illustration categories of The Batsford Prize. 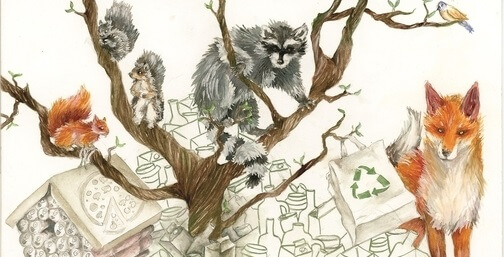 Entrants were asked to submit up to five digital images of their work and a 500-word supporting statement.

The judging panel was made up of Tina Persaud, Publishing Director at Batsford, Michael Foreman, one of Britain’s most celebrated children’s illustrators; Vaughan Grylls, fine art photographer and former Director of the Kent Institute of Art and Design; Gemma Williams, a leading fashion writer and author; Jean Draper, one of the world’s best textile artists and lecturer in textiles; and Katie Cowan, Publishing Director at Pavilion Books.

Speaking about Kaye’s work, the panel said: “Kaye Lindsay’s ‘Rejuvenation’ was a delicate and heart-warming animal illustration that reminded us why we must reuse, recycle and reclaim.”

Karl Ricardo, also an Illustration student at Derby, was named a runner-up in the Illustration category for his work City of Ruin, which depicted an imaginary fantasy world, created from recycled materials, in a graphic novel format.

Derby Illustration student Theodora Cube was also shortlisted for the competition for her artwork, Creative Process.

The winners were announced at an awards ceremony at Cass Art’s flagship store in Islington London. Kaye was awarded £500 and Karl received £50 worth of Batsford books.

Nicki McNaney, Senior Lecturer in Illustration at the University of Derby, said: “We are extremely excited that Kaye was awarded first prize.

“All of the students entries had to reflect the desire and need to reuse and recycle materials and all three students reflected this successfully in their own personal approach to illustration.

“The competition was of a high calibre and the Illustration students from the University of Derby won alongside other top art universities, including the Royal College of Art and Slade School of Fine Art.”

For more information about studying Illustration at the University of Derby, visit: www.derby.ac.uk/art-and-design-courses/illustration-ba-hons/