A photography student at the University of Derby is urging men to check for symptoms of testicular cancer through a series of powerful images.

George Baxter has created three “advertising-style” photographs featuring a man on a motorbike, another in a pub and a male firefighter – each with their hands down their trousers.

The 22-year-old Commercial Photography student said he wanted to produce images for his final degree work which would make people “stop and think” about the seriousness of testicular cancer and encourage people to talk more openly about the disease.

George said: “When I first told people I was thinking about doing a project to raise awareness about testicular cancer I found myself worrying about how loud I was saying it and found myself whispering – and that is exactly the reason why I wanted to do this project.

“I want to stop people from being afraid and embarrassed about talking about it and raise awareness of preventative practice and the importance of checking.

George said he chose to shoot the images in “stereotypically male environments” in a bid to stop the notion that seeking help or talking about the issue was in any way “emasculating”.

He added: “I really wanted a beautiful advertising style for each of the images because I needed to make each picture as high-quality as possible to contrast with the guy in the middle of it checking himself.

“I wanted to make people think the images were for perfume, or whisky, or something glamorous but then when they look closely they see what the campaign is really about.

“I didn’t shoot the men having their hands down their trousers to be sleazy, I did it to raise awareness and show the men in urgent environments, not just at home or while watching the TV, and the importance of being able to check yourself wherever you are.

“Checking for testicular cancer is something that people should be bringing into their everyday lives. I want men and women to be able to talk about it openly, as well as men to other men. Ultimately, cancer doesn’t wait for the right time, so neither should you.”

George’s work was recognised at a special launch of the University of Derby’s Big Show Public Exhibition on Friday evening, where he was given the ‘Foundation Derbyshire Award’ for his campaign.

The Big Show Public Exhibition, which is held at the University’s Markeaton Street and Britannia Mill sites from Saturday, May 28 to Saturday, June 11, 2016, gives visitors the opportunity to immerse themselves in a feast of visual art, design, textiles, photography, creative expressive therapies, architecture and engineering created by final-year students. 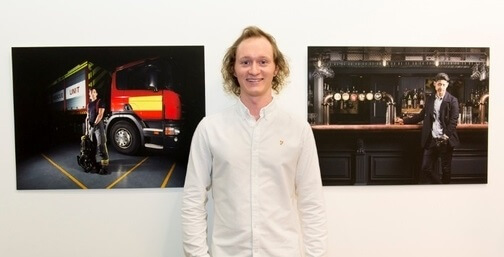 George added: “In any work I do, I try to create something that is going to affect positive change. It was, therefore, such an honour to receive an award for the series, especially by Foundation Derbyshire, who do so much within our community.”

Alongside George, a host of other students were given special awards including Victoria Squire, BA (Hons) Textile Design student, who received ‘The Innovation Award’ for her luxury weave fabrics, which she has created for car interiors.

Product Design student Marius Zaglinskis was given ‘The Vice-Chancellor’s Award’ for his “cactus” shoe storage system.

The plastic construction, which holds up to six pairs of shoes, stores, dries and disinfects. It has an air draft as well as a UV light and heat module to eliminate dampness and bacteria.

“It was a shock to receive this award but I am very pleased.”

In the College of Engineering and Technology, Product Design Engineering student Blake Watson scooped the Vice-Chancellor’s Commendation Award for his Pangolin Case – a smartphone and card anti-theft case.

Layered with rows of Neoprene Pangolin inspired scales, the case is extremely difficult to be pickpocketed as it grips into the lining of the pocket. The metallic body reflects and disrupts radio frequencies, protecting the phone and cards in the case from radio-frequency identification and contactless theft.

Andrew Gratton, also a Product Design Engineering student, won The Innovation Award for his B-Ware Cycling Safety Product – a gadget which can be attached to the handlebars of a bicycle that alerts the cyclist to an approaching motorist’s position. The product was designed based on research about cycling safety.

And the Best College Student Submission in Show Award was presented to Anthony May, an Architectural Technology and Practice student, for his vision for Derby’s Market Hall to become the city’s central hub for entertainment and innovation including a restaurant, merchandise store, tourist information, café as well as office space.

Speaking at the event on Friday, Huw Davies, Dean of the College of Arts, added: “The Big Show is a collection of the three to four years of hard work and commitment of our students.

“The Big Show offers visitors a unique opportunity to experience the very best of emerging contemporary art and design practice from our final year students. Their work explores the issues and subjects of today's world also looks ahead predicting and setting the trends of tomorrow.”