Smartphone addicts are more anxious and have lower self-esteem than nature lovers, new research by the University of Derby has revealed.

A team of researchers carried out a survey to study people’s phone use and their connection to nature.

And the study, which is believed to be the first of its kind, has revealed people who are in touch with nature use their phone half as much each day, have significantly higher self-esteem, are significantly more conscientious, emotionally stable and open to new experiences.

Lead researcher Dr Miles Richardson, Head of Psychology at the University of Derby, said: “Technology is often cited as a reason for our disconnection from the natural world but smartphones are here to stay.

“Nature connectedness isn't about going back to some halcyon days where we lived in harmony with nature. It's about realising our place in a wider ecology here and now. Technology must play a role in that and smartphones are clearly powerful and engaging tools.

“Technology can help deliver nature into people's everyday lives, helping them realise their place in the wider natural world.”

The survey was completed online and used scales to measure people’s phone use, connection to nature and personality and self-esteem. Participants also completed an anxiety questionnaire. 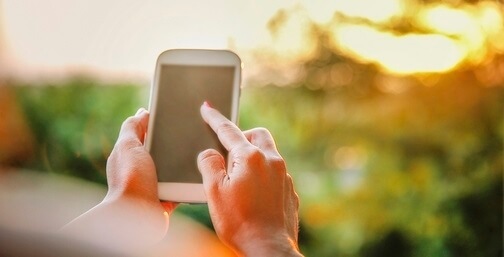 It showed that people who used their phones more were 33% more anxious and had a greater relationship with their phones than nature.

The research follows on from a pioneering study into smartphone addiction in March 2015, co-authored by Dr Zaheer Hussain, Lecturer in Psychology at the University of Derby, which revealed that 13% of participants in the study were addicted to their phones, with the average user spending 3.6 hours per day on their device.

The latest smartphone research will be presented at a conference, called Nature Connections 2016, on Wednesday, June 15 at the University of Derby.

The conference, organised by the University of Derby and Natural England, brings together scientists and practitioners to discuss the health and environmental benefits of connecting people to nature, and is being supported by The National Trust, The Wildlife Trusts, Historic England and the RSPB.

Gwen Potter, Countryside Manager for the National Trust on the Northumberland Coast, said: “Screens can still offer us new ways to connect with wildlife but if people don’t care about nature, they won’t want to protect it.

“At a time when everything from common seals to curlew are under threat, what’s more useful: your selfie or your relationship with nature?”

Adam Cormack, Head of Communications at The Wildlife Trusts, which recently launched this year’s 30 Days Wild – a campaign to get people to do something connected to nature every day in June, added: “Phones can be useful for recording and photographing wildlife and sharing those experiences but time away from screens can help us to immerse ourselves more fully in nature.

“People who took part in The Wildlife Trusts 30 Days Wild campaign last year felt healthier, happier and more connected to nature. Some people used their phones a lot while others didn’t at all.”