The history of theatre in Buxton over the past 200 years will be revealed at a special heritage event next month.

Actress Carol Spencer and fellow members of heritage company Discover Buxton have developed a character, called Miss Lilian Violet Bowdine, and others from the town’s history to bring to life free tours from September 8 to 11.

Carol will recreate the Edwardian splendour of Buxton during a walking tour in which she illuminates the theatrical history of Buxton including the early days of the opera house.

The Opera House is not the opening act in the story, however, as Miss Bowdine will reveal. There had been theatres in Buxton before.

The first documented theatre was in Spring Gardens and later the New Theatre opposite the Old Hall Hotel.

Despite that establishment only lasting from 1833 to 1854, it played host to the great violin virtuoso Paganini, a man so talented that it was rumoured he must be possessed by the devil to play so well.

Carol will also take visitors through the history of The Hippodrome, later The Playhouse and now the Pavilion Arts Centre, which in its hey-day hosted the Buxton Repertory Company, which included the actor, the late Sir Nigel Hawthorne, star TV’s of Yes, Minister. 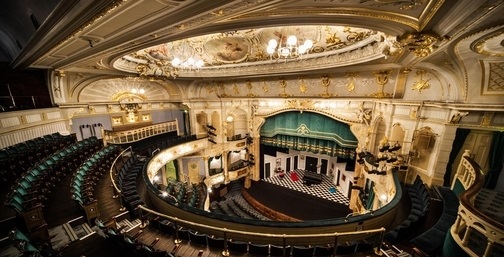 The character Miss Bowdine was created by the Discover Buxton team to reflect the character of actresses of that time.

Carol said: “They were very well travelled and quite well educated for a period when women weren’t really expected to achieve much. They ran their own theatre companies, toured America and had a lot more independence than history remembers.”

Heritage Open Days in Buxton will see the Opera House, Queen Mary’s Bower in The Old Hall Hotel and the University’s Buxton Campus open to the public for free. There will also be special tours led by other Discover Buxton costumed characters including Robert Rippon-Duke, Mary Queen of Scots, who imprisoned in the Old Hall, and Vera Brittain, peace campaigner and author.

The University of Derby has helped to fund and organise Heritage Open Day events in Buxton to promote the town’s tourism industry.

Find out more about studying Tourism at the University of Derby.