Olympic gold medallists Adam Peaty and Hollie Webb will be among the recipients of Honorary Degrees from the University of Derby this November.

Each year notable people, with a strong connection to the University or to the city, are chosen to receive an Honorary Degree at the annual Award Ceremonies, when the University’s students graduate after completing their courses.

Thousands of students, guests and VIPs are expected to attend the next set of Award Ceremonies which will take place on Thursday, November 24 and Friday, November 25, 2016 at Derby Arena. 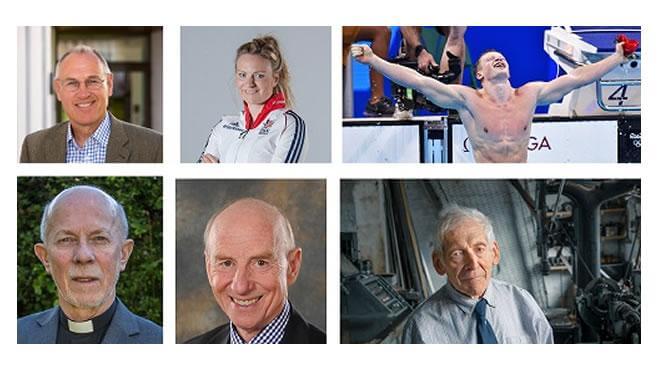 Born in Uttoxeter, Adam Peaty is a swimmer who won Team GB’s first gold medal at the Rio 2016 Olympic Games. His time of 57.13 seconds in the men’s 100m breaststroke final set a new world record and brought Britain its first men’s swimming gold in 28 years. He also scooped a silver medal as part of the men’s 4x100m medley relay.

Hollie Webb is a British women’s hockey player and Olympic gold medallist. She scored the winning goal against the Netherlands in the finals match at the Rio 2016 Olympic Games.

Hollie grew up in Belper and was educated at Ecclesbourne School. Her international debut came against South Africa in Cape Town in 2013, while she was still at university. Since then, Hollie has gone on to win a number of medals at international level, including silver at the Commonwealth Games in 2014 and gold at the EuroHockey Championships in 2015.

Until recently Charles W. Haycock was the owner of William Haycock, one of the oldest clock making businesses in the UK, now owned by his son Neil. The business has been run under the Haycock name since 1826 but its roots can be traced back to 1740. Charles was a founder member of the Crich Tramway Museum near Matlock which he helped create in 1959.

Charles was awarded a certificate of excellence by the Worshipful Company of Clockmakers and is also an Honorary Fellow of the Royal Horological Institute.

Sir Stephen Moss is, by background, a nurse who has devoted his career to healthcare. He previously held senior NHS positions in nursing and general management. The Secretary of State appointed him as Commissioner on the original NHS quality regulator and he was Vice-Chair of the team which developed the first reviews of clinical governance in England and Wales.

Sir Stephen undertook the role of Chairman at Mid Staffordshire NHS Foundation Trust following the Healthcare Commissions highly critical report. Those events were a defining moment for health and social care in the UK and a challenging time in NHS history.

He was awarded a knighthood in 2006 for services to the NHS, and currently sits on the Boards of Health Education England and Derby Teaching Hospitals.

David Coleman worked for both Derbyshire and Leicestershire police forces during his 32 year career and was Derbyshire’s Chief Constable for seven years before retiring in 2007. As Chief Constable, David served as a member of the Association of Chief Police Officers Terrorism and Allied Matters Committee, and became the national lead spokesman on forensic sciences.

Following his retirement from Derbyshire Constabulary, he became the Chairman of Derbyshire Association for the Blind, having been a member of their board of Directors before that. David is also a trustee and Chair of the Foundation Derbyshire Grants Committee and, since his retirement from the police service, he has also been President of the Peak District Mountain Rescue Organisation.

David received the Queen’s Police Medal for Distinguished Service in 2004 and was appointed Deputy Lieutenant of Derbyshire in 2007. Most recently he served as Derbyshire’s High Sheriff for the year 2014-15.

Professor David Thomas is an internationally regarded scholar and writer on the history and theology of Christian-Muslim Relations. He specialises in religious thought in Islam and in encounters between Christians and Muslims, particularly in the Arab world.

He is Chief Editor of the journal Islam and Christian-Muslim Relations and leader of a major international project to compose an encyclopaedia of all works written by Christians and Muslims through 1,400 years of history.

Professor Thomas is engaged in the region in promoting interfaith dialogue. As Honorary Canon Theologian of Derby Cathedral, he has regularly given addresses on Christian-Muslim relations in the Diocese of Derby. He was a co-founder of the Derby Dialogue Group and he has served as a Governor in one of the city’s church schools with a Muslim majority.

Professor Kathryn Mitchell, Vice-Chancellor of the University of Derby, said: “Graduation is a culmination of our students’ hard work and commitment and we are delighted to share this occasion with our honorands, all of whom have made an exceptional impact on their community or industry.”

For more information about the University of Derby’s Award Ceremonies.