Taking part in a national Chinese cookery competition has brought an extra portion of work experience with a TV chef for University of Derby Culinary Arts student Anthony Wood.

Anthony was chosen to take part in the final of the Wing Yip Oriental Chef of the Year Competition held in Birmingham last week.

Although he did not win, head judge and TV chef Glynn Purnell was so impressed that he has offered Anthony work experience in his Michelin-starred restaurant in Birmingham.

Anthony, a first-year Foundation Degree student, had to prepare two dishes to get on to the shortlist. One had to be a modern twist on a takeaway dish, and the other a plated meal.

Anthony, from Stalybridge, only entered to give himself experience in competitive cookery and was amazed to get through to the final on his first attempt.

“I was really happy with how I performed as many of the chefs were working in Michelin and AA standard restaurants,” said Anthony. 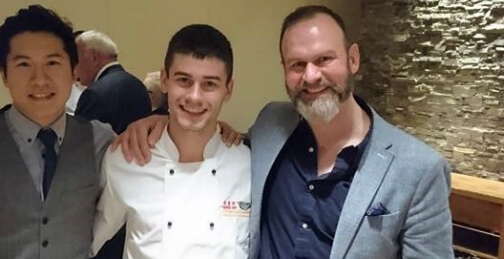 “I spoke to Glynn Purnell after the competition and he offered me a day or two work experience at his Michelin-starred restaurant.”

Glynn has taken part in the Great British Menu, winning twice and then appearing as a mentor. He has previously featured on The Great British Food Revival and the BBC Good Food Show, and is a regular guest chef on TV’s Saturday Kitchen.

To study Culinary Arts at the University of Derby, visit culinary arts.