And she’s now using her skills to help students at Buxton and Leek College who are struggling with their academic work.

Charlie, from Wirksworth, graduated in 2012 with a BSc in Martial Arts Theory and Practice with joint honours in Sports Massage and Exercise Therapies.

She completed a teaching diploma and worked as an associate lecturer with the University’s Charles Spring on the BA Martial Arts Degree, in collaboration with the European Wing Chun Association (EWTO) in Heidelberg, Germany.

Charlie is now a fourth dan black belt, one of only a handful of women at this level in the North Midlands region, winning the Best Female title in the process.

But martial arts is more about conquering yourself than fighting other people, she says.

“It’s like meditation to movement. Sometimes you get to fight people in a ring, but there is a spiritual, therapeutic side which is excellent for confidence and self-esteem.” 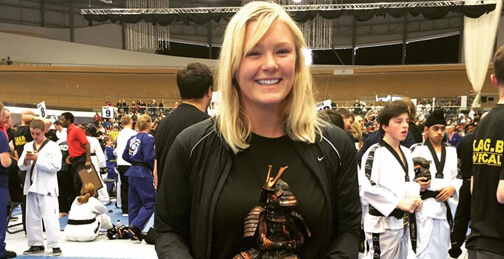 Charlie took up martial arts when she was seven and is now a full-time study coach with Buxton and Leek, the Further Education wing of the University’s education offering in the town.

Tae Kwon Do is based on five tenets: courtesy, integrity, self-control, perseverance and an indomitable spirit.

“When you work with children you use those principles every day,” said Charlie, who is continuing her studies part-time with the University of Derby on the postgraduate MRes Sport and Exercise degree.

Charles Spring, who now teaches on the Wellness degree at Buxton, said: “Charlie was an excellent student who has continued to grow and develop into her role at the University. She shows the spirit and determination that can come from training in the martial arts and the empathetic abilities that flow from developing as a coach, instructor and teacher within the arts also.

“That Charlie has won this award comes as no surprise to me; she has the focus that develops when mind, body and spirit are developed as one as they are in the martial arts.”