University of Derby martial artist Charles Spring is helping to give injured ex-service personnel a fighting chance in civilian life – by taking on 100 opponents one after the other.

Charles’s challenge will be the centre-piece at the launch of a new charity which offers a system of inclusive martial arts for people of all abilities, based on the Wounded Warrior scheme used in rehabilitation for injured members of the US Forces.

The fighting marathon is a Karate tradition called the 100-Man Kumite, or “Grappling Hands”, and will take place when the UK’s Disability Martial Arts Association (DMAA) unveils its own Wounded Warrior-style system, called Britannia Hero Inclusive Martial Arts, at a charity event in Buxton, Derbyshire, on October 15 and 16.

“It will allow ex-military personnel to remain heroes,” said Dave Lee, of the DMAA, who developed the system for the UK.

Martial arts is recognised as a way to boost self-esteem and physical fitness during rehabilitation, and Britannia Hero is designed so that anyone – no matter what their physical, emotional or mental abilities – can compete against each other, and is not restricted to ex-service people.

The event will also feature the DMAA’s Silver Dragon martial arts programme, which teaches the over 60s how to use a walking stick for defence – although its main aim is to provide an easy and interesting cardiovascular work-out. 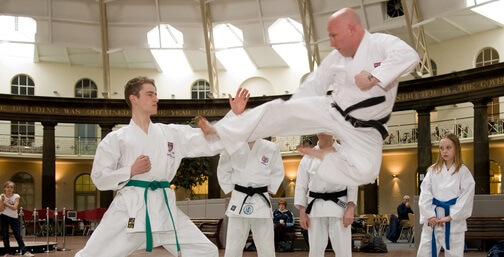 The event will be hosted by Mik Scarlet, whose ‘Beat That’ TV programme for disabled children inspired Dave in the 1990s after a car accident confined him to a wheelchair.

Charles, who is a member of the Martial Arts Hall of Fame and a lecturer in Wellness Management, has worked at the University’s Buxton Campus with Dave and the DMAA for many years. He will be one of several people taking on 100 challengers on the day.

He estimates that there are only 600 people in the world who can tackle the 100 Man Kumite in its original form, although the Buxton event will be tailored so people of all abilities can take part. Even so, it will take more than three hours non-stop to complete.

“We are looking at working with people with disabilities more and more as part of our remit,” he said.

“Raising money by doing something this difficult shows what people with disabilities are able to do. That creates more inclusivity which in turns creates more wellness.”

Find out more about DMAA