The paper explores the potential of using popular culture as a tool to enhance the teaching and learning of students, specifically in Higher Education.

Talking about the innovative teaching technique, Dr Turner said: “The idea came from a lesson where I used the opening credits of The Simpsons to teach the principles of handwriting analysis to undergraduate forensic science students.”

The opening credits of the show feature a series of chalkboards displaying handwriting lines produced Bart Simpson, which is where the core element of the lesson plan comes from.

There are a large numbers of sequences and common word and letter combinations that present a way to illustrate characters of handwriting, individual and class characteristics, and variation.

The Simpsonsmodel for the teaching of handwriting, recently published in the Forensic Examiner, has been used on two cohorts of undergraduate forensic science students, which found that 97% of students found the lesson “very enjoyable”. 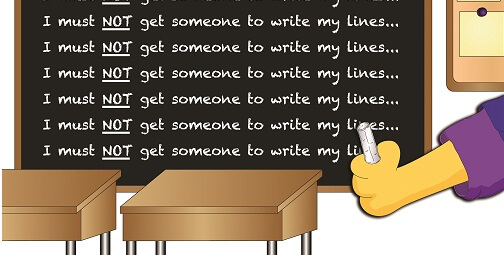 Dr Turner added: “It is clear the use of the TV show has a positive impact on students’ engagement with the topic and shows the potential of popular culture in teaching forensic skills.”

Popular culture is a well-explored medium in the classroom, and cartoon-shows like The Simpsonshave been the subject of serious scholarly activity in range of disciplines, including Psychology, Economics, and Philosophy.

Dr Turner said: “In my teaching I have found that popular culture can be a great way to aid learning, increase student engagement, understanding and enjoyment.

“Alongside television shows such as The Simpsons, examples of various other aspects of popular culture including books, magazines, music and films have in recent years been utilised as vehicles for education.”

Multiple episodes of The Simpsons have been shown to cover scientific concepts, including: evolutionary theory, velocity, Newton’s first law and the periodic table, making it a valuable teaching resource.

Cristina added: “The Simpsons shows just how powerful popular culture can be as a tool for engaging students, providing them with a familiar gateway through which to journey into fascinating areas of science.”