Judges from the East Midlands in Bloom contest visited the University of Derby’s campus in Buxton on July 15 to see how its sensory gardens and plans by students to create a herb garden could help the town win in this year’s competition.

Three Culinary Arts students won a grant from their Students’ Union to develop the garden so it could supply fresh herbs for use in the training kitchen and the University’s fine dining restaurant, which this year won the AA’s highest award for a catering training establishment.

It now provides a beautiful and relaxing space for students and staff. 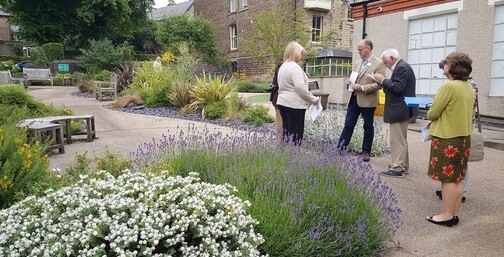 John Phillips, the University’s Community Liaison Officer and a member of Buxton Town Team, which hosted the judges’ visit, said: “The University is also sponsoring a tableau in this year’s Well Dressing festival, which will feature a picture of the Campus’s famous Devonshire Dome made in the traditional way from flower petals.”

The judges also heard how horticulture is used by the University’s Further Education partner, Buxton and Leek College, to promote life skills and help out in community projects such as allotments and the town’s fledgling Community Farm at The Serpentine.

Buxton and Leek College students also helped with Ashwood Park, which has been entered into Royal Horticultural Society’s It’s Your Neighbourhood competition which was assessed on the same day.