Four female film students have joined forces to create an award-winning short film about a same-sex relationship and break the misconception that the film industry is male-dominated.

Adrift follows Poppy Miller's (Maisie Barlow) relationship with her girlfriend Esther White (Harriet Bates), which is tested when she is undecided about coming out to her parents. When something causes her world to come crashing down around her, Poppy must make an important and potentially devastating decision.

The short drama was written by the all-female crew as part of their final-year project while studying Media Production at the University of Derby. It has now had more than 750,000 views on YouTube and has received positive comments from many people in the LGBT+ community.

Laura Haynes, said: “The four of us worked incredibly hard to make this production, with some of us taking on double roles throughout the process. We’re all really proud of the final film and the reaction we’ve had so far has been overwhelming. 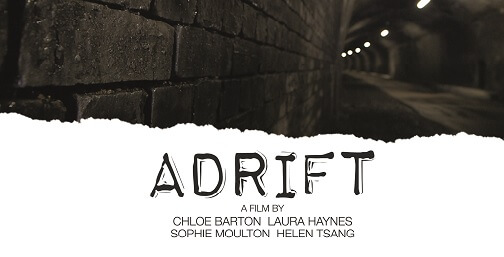 “I recently discovered that only 13.6% of directors within the media industry are women and that’s shocking to me. There is a huge pool of talented, hard-working females working in film and television and we all deserve the same recognition and chances that our male counterparts have.

“It’s been a privilege to work in an all-female team while making Adrift and we’re hoping to continue the film’s success having entered it into four upcoming film festivals.”

Phil Basi, Programme Leader for Media Production, added: “This is the first time ever we have all the third-year films produced, edited and directed by all female teams with some outstanding results. This shows that we are supporting the latest research carried out by Directors UK about the lack of female representation in the film industry and we believe that the girls are destined for a great career in media.”

Laura, Sophie, Chloe and Helen all graduated at the University of Derby’s Award Ceremonies this week (Thursday, July 14 – Friday, July 15).

Watch Adrift in full or take a look behind the scenes.

Find out more about studying Film and Media at the University of Derby.