Experts gather at bee summit to address decline in species

Bumblebee experts from across the country gathered at a Bee Summit to address the decline in species hosted by the University of Derby on June 24, 2016.

More than 50 people attended the conference which was hosted by the Derbyshire Wildlife Trust and the University, including, Gill Perkins, Chief Executive Officer at the Bumblebee Conservation Trust; Richard Winspear, Senior Agricultural Advisor at RSPB; and John Malpas, Environment Manager, Toyota Motor Manufacturing.

Professor Paul Lynch, Head of Department of Natural Sciences at the University of Derby, introduced the summit. He said: “The summit has provided an important opportunity for organisations and individuals with a common concern about the decline in bee and pollinators numbers to share knowledge and understanding, while importantly identifying opportunities to collaborate and strengthen approaches to preserve and indeed enhance the populations of bees and pollinators so vital to the sustainability of our wildlife and food production.

“In recent years there have been substantial declines in many bee species in the UK, with evidence of reduced ranges for species and particularly solitary species becoming more endangered.

“The Bee Summit celebrated the significance of bees to the sustainability of our environment, assessing why there has been such a significant decline in recent years and considering what can be done to revise these worrying trends.”

Multiple presentations took place throughout the day, including Gill Perkins, Chief Executive Officer at the Bumblebee Conservation Trust. Gill said: “The Bee Summit at the University of Derby brought together, key influencers, community groups and the public in the campaign to highlight and consider ways to reverse the decline of UK pollinators. 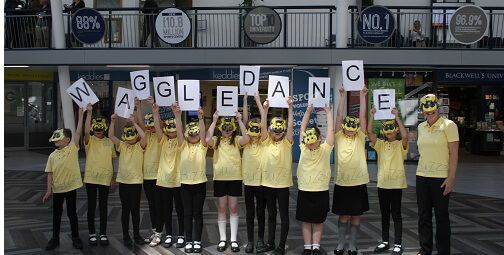 “The enthusiasm for and knowledge of bees, their essential work in providing us with a healthy diet and a countryside rich in colourful flowers, is key to managing the pressures they face and the conference provided a perfect platform for discussion on saving these charismatic creatures.”

12 students from Markeaton School took part in a wiggle dance, which demonstrated how bees ‘dance’ to show others the location of pollen and nectar sources.

Paul added: “The UK is home to approximately 267 species of bees, including the well-known honeybee and bumblebees, but also many species of solitary bees. A healthy bee population is fundamentally important as they are primary pollinators for many of the UKs wild flowers and agricultural crop plants.

“Approximately 78% of temperate flowering plants are insect-pollinated, meaning without insects such as bees they could not successfully reproduce. Bee pollination (often from commercial hives) is vital for the production of important UK crops including oilseed rape, apples and strawberries."

Tim Birch, Head of Conservation Strategy and Advocacy at Derbyshire Wildlife Trust said: “The event was inspiring to hear so many different voices speaking up for Derbyshire’s bees. Our bees and other pollinating insects such as moths, butterflies and hoverflies are in serious trouble in Derbyshire and it is vital that we are all working together to take action to help our bees and other pollinators. If not then the future looks bleak indeed for wildlife in Derbyshire as pollinating insects are vital for a healthy environment.”