Derbyshire-born James Berresford has been awarded an honorary degree by the University of Derby in recognition of his career in tourism which has ranged from working as a teenaged ice-cream van driver to guiding VisitEngland as its Chief Executive.

He will receive the award at the annual graduation ceremony in Buxton on November 12– where he has just taken on the job of safeguarding the legacy of the £50 million project to turn the historic Crescent into the Peak District’s first five-star hotel.

James was the first ever Tourism Officer employed by Nottinghamshire County Council, for whom he later looked after Sherwood Forest as Assistant Director of Leisure.

And he was at the forefront of English tourism policy during two of the nation’s most important events: the 2012 Olympics and the Queen’s Diamond Jubilee, using them to raise the profile of English tourism both nationally and internationally.  As the CEO of VisitEngland he initiated a multi-million tourism campaign entitled ‘Growing Tourism Locally” and launched a hugely successful Holidays at Home promotion.

Tourism hasn’t always been seen as such a vital industry to the nation’s economy, said James: “In my early years, tourism really wasn’t taken all that seriously – it was just seen as a bucket and spade industry.  Now that has certainly changed.”

But by the time he retired as CEO of VisitEngland, he had used his wealth of experience to keep tourism at the top of the Government’s agenda for boosting the economy and to encourage more and more people to see England as the excellent visitor destination it is.

“Opportunities come and go but the thing to do is keep the momentum going,” said James of the unrepeatable Olympic and Jubilee year events.

“We are in an internationally competitive world and today’s visitors typically are well travelled and have a lot of information. Their expectations are much higher than they were 20 to 30 years ago. It’s not even about the expense: even at the budget end you have to deliver a great experience.”

It was much easier meeting visitors’ expectations in his first tourism job: selling ice cream in the 1976 heatwave while he waited to go to University where he graduated in Humanities, majoring in drama. 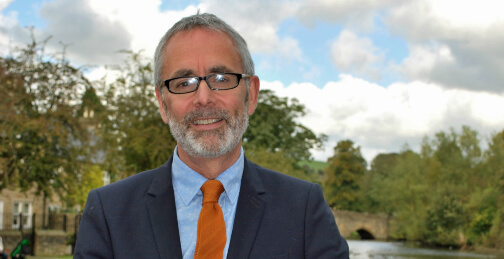 “It was really hot that year  – the perfect time to be an ice cream van driver,” said James, who worked in arts administration and theatre management before moving into tourism, particularly countryside recreation.

Roles followed as East Midlands Regional Director for the Heart of England Tourist Board and Director of Tourism for the North West Development Agency, where he was instrumental in Liverpool’s successful Capital of Culture programme.

The results he achieved led to James becoming the Chief Executive of VisitEngland, the country’s official tourism body in 2009, leading the development and delivery of the first national tourism strategy for England.

This experience will be a great asset for Buxton in his unpaid role as the first Chair of the Buxton Crescent and Thermal Spa Heritage Trust, which will protect and promote the buildings and their heritage, with a focus on their spa tradition.

“It’s very important to create a unique experience, and this is a unique development, not just for Derbyshire, but the UK as a whole,” he said.

“The Crescent development will be an internationally important visitor attraction. This position, along with my recent appointment to the Board of local leisure firm Pinelog Ltd, will hopefully allow me to make a real contribution to the county I love.”

James is married with one son.  He lives in the Peak District where he likes to make the most of his passion for the countryside as well as following Chesterfield Football Club, where he is a season ticket holder.  He is a great supporter of the theatre and a member of the advisory board for the Liverpool Institute of Performing Arts.