A media production graduate who created a film to highlight the struggle faced by children in China whose parents are forced to leave their hometown to find work has won two prestigious media awards.

The film is based on the true story of a young girl’s battle to maintain a long distance relationship with her parents who left rural China in the hope of finding better paid jobs in the city and how new technology, such as videophones, is aiding communication between absent parents and their children in the school environment.

Yue, 24, who graduated from the University of Derby in July, said: “I can’t believe that I won two categories; I’m overjoyed and truly believe this would not have been possible without the support of staff and fellow students at Derby.”

Yue, who was an international student at Derby and who lives in China, spent one month filming the video in Enshi City.

She said: “I focused on presenting children in the less privileged areas of China, whose parents have left their hometowns to work in major cities. They are, therefore, separated from their children by hundreds of miles and, in some cases, only get to see their children once a year.

“Children very often have to cook and clean for themselves and even take care of their elderly grandparents and younger brothers and sisters.

“As a result of this, the videophone system has been set up in all rural schools in Enshi Prefecture which means that children can grow up happy and healthy.

“By creating this film, I hope people can learn and understand the feeling of the alone children and help promote the effective solution to resolve this social challenge.” 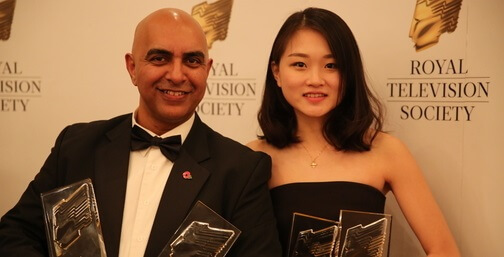 The winners of the awards were announced at a special ceremony at The National Motorcycle Museum in Solihull on Thursday, November 3.

The awards were presented by Steven Knight producer and writer of the BBC hit series Peaky Blinders and celebrated the achievements in television, digital and broadcast production.

This was the second-year running that films created by students on the Media Production programme at the University of Derby have been shortlisted for the Royal Television Society Awards.

Phil Basi, Media Production Programme Leader at Derby, said: “This is a great achievement for Yue and the course, highlighting that we can produce award-winning students with high calibre skills required to succeed in media production.”

As well as Yue being up for a series of awards, two Film Production students were nominated.

Deshanthan Sureshkumar and Matt Sharratt were shortlisted in the Best Student Short Feature for their experimental visual drama, Eupnea.

Dorothy Hobson, Chair of the Royal Television Society’s Midlands Centre, added: “The range of awards showcased both existing talent and the new talent emerging from those receiving the student awards. It was a very successful evening and once again the professional broadcasters were very supportive and encouraging to the student entries – sometimes marvelling at their skills and creativity."

Yue will now go on to represent the Midlands at the National Royal Television Society Awards in London in spring 2017.

For more information about the Awards, visit: www.rts.org.uk/award/rts-midlands-awards-2016-0

You can also view footage from the ceremony at: https://rts.org.uk/article/watch-rts-midlands-awards-2016-live-stream