The University of Derby has been ranked in the Top 50 in The Guardian University Guide 2017 after climbing 25 places.

Derby has jumped from 73rd to 48th place out of 119 institutions – the second biggest jump in the country – to achieve its highest ever ranking.

The Guardian league tables, published today, rank universities according to a variety of criteria including value-added score that compares students’ entry qualifications with their final degree results, how satisfied final-year students are with their courses and the student to staff ratio. Derby showed improved performance across all criteria.

Welcoming the results from today’s The Guardian University Guide 2017, Professor Kathryn Mitchell, Vice-Chancellor of the University of Derby, said: “The fact this is our highest ever ranking says a lot about where we are currently at as a University.

“It is particularly pleasing to be recognised in the Top 50 in the country by The Guardian which puts such a heavy focus on student experience and satisfaction which has always been at the heart of our approach.”

In this year’s Guardian University Guide 2017, Derby's figures include: 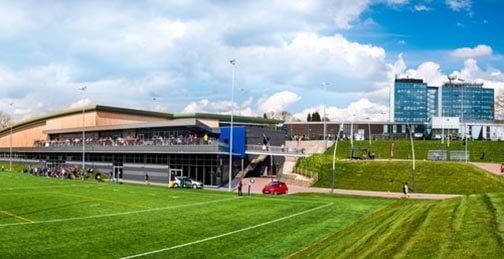 As well as an overall ranking, The Guardian University Guide 2017 also produces league tables for each subject area which has seen some equally impressive performances for Derby. These include Top 10 rankings for Fashion and Textiles, Hospitality, Event Management and Tourism, Journalism, and Film Production and Photography.

Law at the University of Derby has been ranked in the Top 20, as has Sports Science, along with Education – which, in 2015, was awarded ‘Outstanding’ – the highest accolade from Ofsted – for its teaching training.

Many prospective students rely on annual guides published by national newspapers and elsewhere, to inform their decision as to where they study.

Professor Mitchell added: “A Top 50 overall ranking and an increasing number of subject areas in the Top 20 will have a positive impact on our national profile and I hope will encourage even more students from across the country to take a look at what Derby has to offer.

“We are already heading for a record intake this September and this now builds a solid foundation for further growth over the coming years.”

For more information about studying at the University of Derby, visit: www.derby.ac.uk

To find out more about the Guardian University Guide 2017, visit: http://www.theguardian.com/education/ng-interactive/2016/may/23/university-league-tables-2017