Vivienne took to the stage, leaving fashion to one side, to discuss climate change and her campaign, Intellectuals Unite, which is about ‘changing the world order so that the human race can survive and evolve’.

Vivienne expressed how she wants to build the intellectual movement within universities and colleges:“Education is about helping people discover their true talent. For me the aim of Intellectuals Unite is to make sure that we move towards a green economy. We need to get there urgently, it’s crucial in order to save the planet. Any kid off the street who wants to go on a demonstration to find out what’s happening – come and join us, you are an intellectual. We have to unite.”

She added, “The campaign is about understanding and challenging the connections between politics, economics, the environment and culture, and it’s about acting now before it’s too late.”

Born in Glossop, Derbyshire, she rose to fame in the late 1970s when her early designs helped shape the look of the punk movement, shaking the foundations of social norms and status quo.

Vivienne stressed how important tackling climate change was “If you draw a line horizontally at the latitude of Paris all of the land below will become uninhabitable.” She believes the job of intellectuals isn’t to “change the government but to overwhelm them with public opinion.”

Vivienne has twice been named designer of the year in the British Fashion Awards and, in 1992, was awarded an OBE by Her Majesty Queen Elizabeth II. 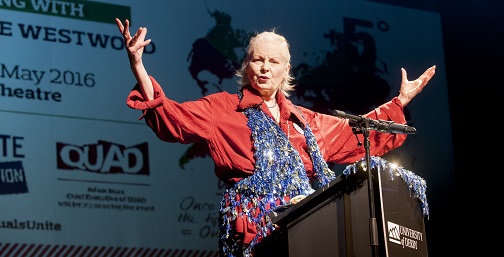 More than 450 students and guests attended the event titled ‘An Evening With Dame Vivienne Westwood’ hosted by the University of Derby.

Adam Buss, Chief Executive at Derby QUAD introduced Vivienne. Speaking at the event he said: “Climate change is one of the most urgent issues we need to address right now.”

Before inviting Vivienne to the stage, he added: “Vivienne has continued to innovate, not just influencing fashion, but often dictating it. Her individualistic designs and unconventional collections have established her global reputation as one of the world’s most original designers.

“Her career has now spanned five decades and her work has influenced millions of people across the world – not only as a fashion designer, but as a passionate and outspoken campaigner on issues such as nuclear disarmament, civil rights, climate change and culture.”

Dr Sian Davies-Vollum, Head of Geoscience at the University of Derby, opened the evening:“We are the instigators of climate change, we have to deal with it, we are the only ones who have the capability to address it.

"As temperatures continue to change, in the East Midlands we can expect hotter summers, water shortages and milder, stormier winters with an increase in floods.

“At the University of Derby we are growing at a fast pace, but due to our sustainable approach our CO2 emissions aren’t.

"Last year (2015), saw record levels of CO2 and, as the instigators, together we need to do something about it, which is why I think it's so important that the University runs events like this to tackle the issue head on and educate our future generation.”