Community get chance to see inside £6.9 million conversion of historic Chesterfield building

Chesterfield will get the chance to see how the University of Derby has spent £6.9 million on converting the former St Helena Girls Grammar School into its new campus in the town at a Community Open Afternoon from 1pm to 4pm on Saturday, October 29.

The school closed in 1991 and became council offices until it was declared redundant. The University bought the building to expand as demand for its highly-acclaimed nursing and public health courses exceeded space in its former base at the Chesterfield Chamber offices. 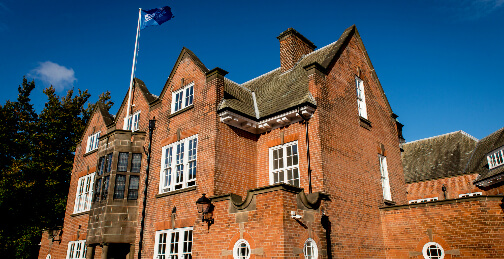 The sympathetic conversion of the Grade II Listed building on Sheffield Road has retained most of its original features while creating a 21st Century learning environment for tomorrow’s nurses, engineers and business leaders.

St Helena’s was ahead of its time even when it was opened in 1911, as architect George Widdows pioneered the use of light and air to create classrooms which put pupils’ needs at its heart. His work was copied all over the world.

The Campus has received investment from partners including £3.48million from the D2N2 Local Enterprise Partnership, promoting economic growth across Derby, Derbyshire, Nottingham and Nottinghamshire.

Funding and support from the European Regional Development Fund is contributing to the costs of equipment and support of the Innovation Centre at the Chesterfield Campus, which will support innovation and business growth as part of the European Structural and Investment Funds Growth Programme in the D2N2 area.

Booking for the Community Open Afternoon is not necessary. No public parking is available on site.

To find out about studying at Chesterfield, go to one of our open days.