Celebrating ten years of success – with another ten years to come

Buxton celebrated ten years of success as a university town on Wednesday – and was promised that the next decade would bring even more exciting developments.

The University of Derby’s campus at the Devonshire Dome already brings an economic boost worth £32 million a year to the area but now its internationally acclaimed work is poised to take Buxton’s visitor economy to a higher level as a Spa and Wellness town.

The University’s Chancellor, the Duke of Devonshire, was one of the guests at the campus, commissioned by his ancestor, The Fifth Duke, as a stable in the 18thCentury. He was joined by the Mayor and Mayoress of High Peak, Councillors George, Jean Wharmby, Professor Roger Waterhouse, who was Vice Chancellor when the University bought the building, and former MP Tom Levitt, who was pivotal in the negotiations between the University and the building’s previous owners, the NHS.

The campus in the historic Devonshire Dome is also a base for Buxton and Leek College of Further Education. By including both Further Education (FE) and Higher Education (HE) students within one iconic building, access is being provided to education for a wide range of students from the local area and globally. 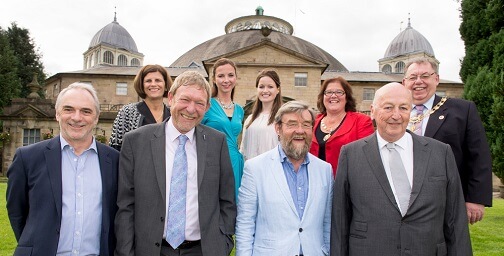 The success of the campus is due to the hard work and commitment of staff as well as the support of the local community. The University hopes that the next ten years will be even more exciting as it aims to increase the number of students coming to Buxton to create a centre of excellence in the town for FE as well as HE.

Dr Sarah Rawlinson, Head of the College of Hotel Resort and Spa Management, was one of the original staff members to begin working at the Dome.

She pioneered the Spa Management degrees, which has since been described as the best in the world, and has now launched a degree designed to create the professionals of the future in the growing Wellness industry, which aims to increase health by caring for mind and body together.

Dr Rawlinson said: “We see Spa and Wellness very much as the future of the town.”